Another day, another short that is gathering considerable word of mouth. Currently touring film festivals, Philippe Bourret’s intense First Night has been a film I’ve looked forward to watching for some time and after a quick Facebook chat with the very awesome Bourret, I got my wish.
Was it worth the wait? Read on… 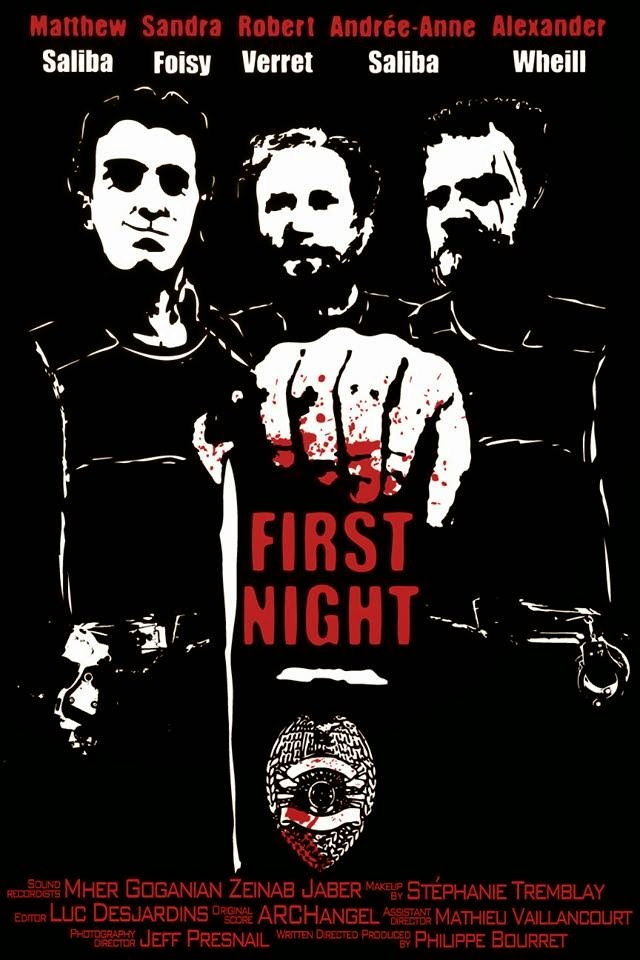 
SPEEDY SYNOPSIS: I’ll try not to spoil too much here, but read on at your own risk.

The film follows two groups on an inexorable collision course. First we meet young flat mates, the feisty Alex (Foisy) and mouse-like Véro (Andree Anne Saliba). The girls are trying to settle in for the night but their nuisance neighbour starts playing unbearably loud music in the adjoining apartment. It seems that blaring music, loud sex and even louder arguments have become a regular occurrence and now the Alex and Vero have reached the very limit of their patience.
Meanwhile in a quiet Quebec coffee shop which is winding down to close for the night, two policemen, the fast-talking and slimy JP (Matthew Saliba) and intimidating, scarred brute Moses (Wheill) are meeting with their depressed and damaged former colleague Rich (Verret). Rich was recently booted from the force and has taken it very badly, so his two buddies have decided to give him one last ride-along,  an opportunity to once again wield authority over the worst dregs of the city.
When the girls finally call the police to deal with their bothersome neighbour wheels are set in motion that will bring both groups face to face... 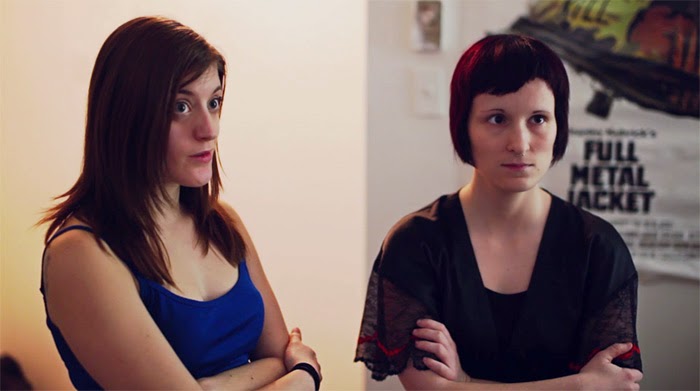 BEST BITS (mild spoiler warning): In director Bourret’s own words — First Night is a micro-budget short, but I can assure you, if this caused any constraints to the film it really is not noticeable at all. By limiting the film to two main sets Bourret is able to ensure that both are lit, dressed and shot perfectly. The camerawork is quite superb, turning the girls’ homely apartment into a claustrophobic cage during the film’s tense climax.
In truth, Bourret has not constructed this story on spectacle, but on a well-written plot, filled with twists and a deeper commentary on society and those that we pick to enforce our rules. The film withholds certain revelations until key moments, letting them slip to cause maximum impact with perfect timing.
It would be remiss to overlook the performances in First Night. Our heroines, Foisy and Saliba, both give us reasons to root for them, whether it be Alex’s spiky toughness or Véro’s fragility. In fact many people will be devastated by a key and disturbing scene involving Véro and the hulking Moses. It does not make for easy viewing.
On the other side of the corn, praise is definitely due to the disillusioned policemen. Wheill is terrifying. I’m a pretty big chap myself, but Wheill’s stone-cold stare and imposing frame sent a chill up my spine. He needs to do more horror work and soon.
However, arguably the scene stealer of entire short is Matthew Saliba. A mix of sleazy charm and motor-mouthed ego, Saliba’s JP is that brat from the playground who can do whatever he wants because he has a prefect badge and serious back-up. He reminded me of a kind of sociopathic cross between Gary Cole, a less wired Jim Carrey and Quention Tarantino’s onscreen roles — all quick, overly chummy delivery with an edge behind it that suggests serious instability. Much like Gary Oldman in Leon Saliba’s performance veers dangerously close to hammy, but always stays just on the right side of the line. This is a tough task to pull off, but Saliba is more than up to it. I cannot wait to see to see more from this very talented actor and will be watching his career with great interest. 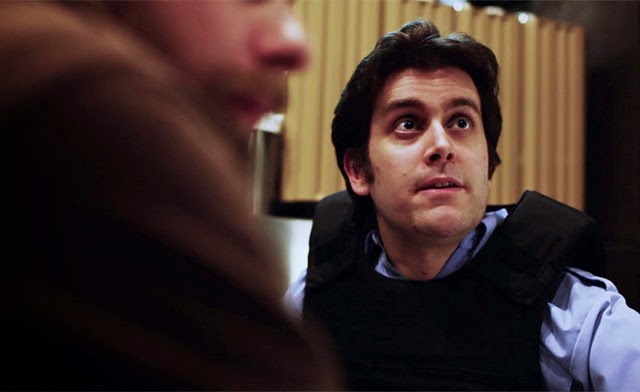 WORST BITS (spoiler warning): It’s difficult to find flaws in such a tightly-wound, well-told story. I suppose it might be possible to say that the very good Verret ends up a little lost in the mix. I would have liked to see more from him, more explanation of his character’s plight and a bit more time and care given to his arc. But when you are squeezing five characters into 30 minutes it must be difficult to give everybody a fair shake.
I also imagine that the aforementioned scene with Wheill and Andree Saliba will be a little strong for some viewers. Her character’s helplessness and the humiliation she endures is gruelling, but never feels gratuitous. Some people can laugh at dozens of teens being hacked to pieces with a chainsaw but become squeamish when the violence becomes darker, more real. These people will find thes sequence a tough watch.
Finally, much like I said with Naked Zombie Girl, I wanted more! If this is a short that acts as an introduction to a far bigger and darker picture, cool. As it stands it is one tiny, almost insignificant event in something that is truly momentous — yet on that very personal level, it shows us what the new world after this First Night could be. VERDICT: This short is quite simply, brilliant. A fantastically taut thriller which raises pertinent questions about the structure of our world and the very nature of law enforcement and the implicit trust we grant heavily armed strangers just because they are wearing a uniform. If those who stare into the abyss find the abyss stares back into them, what happens to normal men or women, with normal human flaws, who deal with the worst kinds of delinquent scum on a daily basis?
The short is both thought-provoking and entertaining. I cannot recommend it highly enough.
At the moment there is no official release for First Night, but Bourret has told me he plans to release a dvd of his short films. As soon as I know any more, I’ll let you know, but the film is touring festivals right now, so keep your eyes peeled!
In the meantime, checkout and Like the film's official facebook page — film of this quality deserves your support.

Until next time, I hope you enjoyed your stay.
Posted by Hickey at 04:54