There has been a real resurgence in nostalgia-tinted, Eighties throwback horror movies as of late.
And when you're talking Eighties Horror, was there any sub-genre more indicative of the time than the slasher movie?
One of the latest movies to join the swelling ranks of retro-slashers is Chuck Norfolk’s Getting Schooled. I was alerted to the film by Circus of the Dead director ‘Bloody’ Bill Pon (did I mention that you can catch CotD on iTunes now and that the DVD/Blu-ray is available for pre-order? Just checking…) and after doing a little research, was pretty hyped to see it.
After voicing my interest, the very cool guys over at Lucky Chucky Productions were kind enough to send a screener my way.
So is this a slasher that's too cool for school?
Or would I have to mark this one an ‘F’?
Read on… 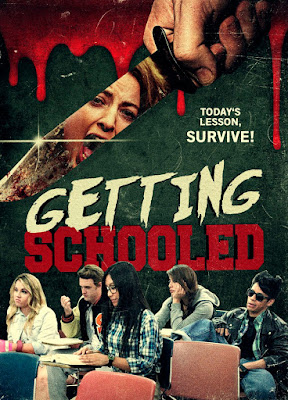 SPEEDY SYNOPSIS: I’ll try not to spoil too much here, but continue at your own risk.

The year is 1983 and a ragtag group of High School students are put into Saturday morning detention, including spoiled princess Hillary (Tyler), knife-packing delinquent Rusty (Ruiz), smart nerd Shelly (Ly), strapping jock Mike (Byrd) and social misfit Julie (Leal). When new substitute teacher Mr Roker (Long) enters the classroom, the wheelchair-bound Vietnam vet makes it clear that he’ll take no shit from any of them.
As the group uneasily settle in with each other an accident occurs, rendering the teacher unconscious. The students panic and try to revive the man, however, when Roker comes to he experiences violent flashbacks to his war days and proceeds to attack the teens with ruthless and ferocious abandon.
Barely able to subdue him, they lock Roker in a supply closet and try to work out what to do next.
However, little do they know that Roker is former Black Ops and now, in a state of paranoid delusion, he has mistaken them for Viet Cong adversaries and he is prepared to use every last trick he learned in combat to take each and every one of them down… 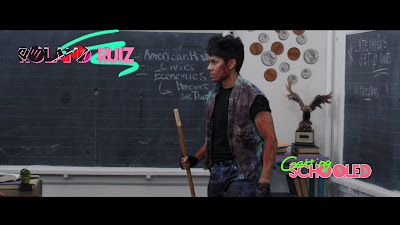 THE BEST BITS (mild spoiler warning): When creating a throwback horror movie, one of the most important aspects is nailing the feel of the era. This is something that Getting Schooled manages admirably.
It’s not just in the fashions and soundtrack, the characterisation and dialogue is straight out of some long-lost John Hughes Bratpack movie. This is only fitting for a film that plays out like some kind of bastard offspring of The Breakfast Club and Friday the 13th — with a little Full Metal Jacket thrown in for good measure.
This might sound like a bizarre mix, but it really runs with the premise, delivering a fun and at times frightening product.
The writing by director Norfolk, as well as Steven Scott Norfolk and Tim Norfolk is sharp, clever and, most importantly, feels like a real love-letter to the multitude of slasher flicks that packed the shelves of video stores back in the Eighties.
The dialogue sounds authentic, while the characterisation manages to conjure recognisable genre stereotypes (jocks, badboys and brainiacs among their number), but still make them individuals that you actually care about by the time the blood starts flowing.
Of course, it helps that the film has collected a fine cast of very good actors, including adult film star Ron Jeremy in a very humorous turn as the school's cynical janitor.
At its core the movie is anchored by a trinity of sterling performances.
First, the very pretty Leal is a perfect fit for her character. She’s likeable and manages to give Julie a fine mix of toughness and vulnerability. She has a number of horror credits to her name already and I’m going to be sure to look up more of this talented actress’ genre work.
Second, Ruiz is clearly having a ball as badboy Rusty, which makes his performance all the more enjoyable for us, the audience. He nails the bravado and swagger of iconic slasher tough guys like A Nightmare on Elm Street’s Rod. It's hard work balancing the dickishness of such a character without just making him utterly unlikeable. To his credit, Ruiz pulls it off.
The final part of this successful and important triumvirate is Long’s barking mad Roker. This is a very tough role as Long is faced with the unenviable task of making a character who is unable to walk seem a legitimate threat to a cast of young characters depicted as being in their physical prime. However, much like the immense Stephen Lang in Don’t Breathe, Long delivers such a ferocious, no-nonsense performance that soon any and all doubts about the danger he might lose are soon dismissed.
He plays the role pre-breakdown like a tough teacher who is clearly not one to take any shit. Post-breakdown he becomes utterly unhinged, a savage, violent monster without mercy or morals.
In short, Long is utterly brilliant.
Of course, the cast are only as good as the material with which they work, and the plot of Getting Schooled, while very simple, delivers a solid, no-frills thriller, with a surprising amount of heart. The set-pieces are pretty nail-biting, while the gory kills are shockingly violent and often particularly gruesome, for those of you who like a horror to boast some splatter (and who doesn’t appreciate a little bloodshed in their slashers?).
It is in each of these scenes that we are also treated to a demonstration of cinematographer John Hale’s skills, as he and Norfolk show some real flair in bringing the horrific to life in a visually striking manner. The colour palette accurately reflects the films of the era to which Getting Schooled so clearly pays homage, but it also creates a captivating look for the movie in its own right, especially during the climactic moments.
Yet as good as the film looks, I keep returning to its heart. The closing moments of the movie are surprisingly poignant, and may even elicit the odd tear.
I know, genuine emotion in a throwback slasher! Who’d’ve thunk it!?

THE WORST BITS (mild spoiler warning): As great as Getting Schooled looks, it is worth reiterating that this is a lower budget indie movie. If you’re used to slick, polished, Blumhouse-style wide-release horror movies, you may need to adjust your expectations accordingly.
These budgetary constraints, on very rare occasions, affect the production values of the film, hampering some effects shots for example, but they also have a knock-on effect throughout the movie.
For example, some of the cast are relatively inexperienced, which means that some line delivery can be a little rough around the edges. Take into account that budget restrictions often also come with time constraints and you can see how how some scenes may not hit as hard as others. It’s clear that the cast are all very much invested in their parts, it’s just that sometimes one or two of them slightly misjudge moments. Luckily these moments are few and far between and only add to the throwback Eighties Slasher feel.
However, I do want to add that the team behind Getting Schooled have clearly worked very hard to get this movie as slick as it can possibly be and they have done a pretty damn good job with the movie.
It is that throwback feel that works as both a blessing and a curse to the movie. In short, if you never enjoyed Slasher movies during their heyday, I very much doubt Getting Schooled is going to convert you to the cause. However, if (like me) you are a child of the Eighties (and in particular, a fan of Eighties horror movies) I’m pretty sure you’ll love it. 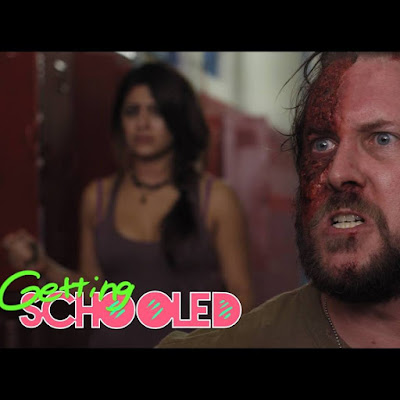 THE VERDICT: What a pleasant surprise Getting Schooled turned out to be! It manages to be a familiar homage to the slasher classics of yesteryear, while still displaying some imagination of its own. But perhaps more importantly, it’s fun and frightening, with some tremendous performances and real emotional weight and pathos.
Pardon the pun, but Getting Schooled is a real ‘class’ act!


If you want to check the movie out, it’s currently on Amazon Prime here; Vimeo here; Vudu here or on Googleplay or iTunes. So what are you waiting for?

You can read more about Getting Schooled over at its official Facebook page here. Give it a like while you're there too, these guys deserve it!

If you haven’t already, do please check out and like the Hickey’s House of Horrors Facebook page, which you can find here. It gives you a nice quick link to any new posts on this blog, plus regular news updates from around the web. I check the Internet so you don’t have to! Alternatively, follow me on twitter: The House@HickeysHorrorsUntil next time, I hope you enjoyed your stay.
Posted by Hickey at 13:39 No comments: