Anybody looking at Universal Studios' continued woes bringing its Dark Universe to fruition could be forgiven for thinking that it is extremely difficult creating an expanded cinematic universe in our beloved horror genre.
But those of you familiar with the work of British indie production company Mycho Entertainment would also know that this is certainly not true. As auteur MJ Dixon has proven since the release of the stellar Slasher House back in 2012, all that is required is a singular vision, careful planning and a whole lot of effort.
Fans of Dixon will be aware that some of the first seeds of the Mychoverse were sewn back in the short-film Thorn, when the titular hulking, masked slasher monster made his first appearance.
Since then Thorn has gone on to steal the show in Slasher House, then expand on his mysterious backstory in the movie's first sequel, 2014's Legacy of Thorn. It was in this film that we learnt the monstrous Thorn re-emerges in the small town of Avondale every leap year on 29th February.
So with four years nearly up, it's time for Dixon's masked maniac to re-emerge — he's back in the soon to be released Mask of Thorn, a prequel to Legacy.
So do Mycho have another micro budget masterpiece on their hands?
Read on... 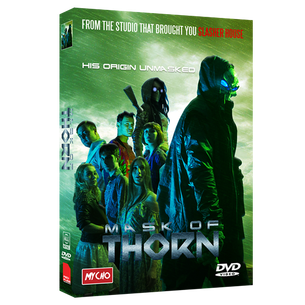 SPEEDY SYNOPSIS: I'll try not to spoil too much here, but continue at your own risk.

Mask of Thorn opens with a superb sequence in Avondale General Hospital in the early Seventies. A mysterious patient, Mina (Metherington) who vanished some time ago, is admitted in a terrible state, desperately holding her newborn daughter close.
As the confused night skeleton shift try to tend to their charges, an unexpected power outage heralds the arrival of a colossal masked man who proceeds to butcher all in his way. Yet, as deadly as he is in his own right, it soon becomes apparent that the monstrous Thorn may not be acting alone.

Flash forward to the mid-Eighties and we meet sweet Bethany (Oliver), who is about to celebrate her sixteenth birthday, despite the reservations of her strict and uptight parents, Derek (Payne) and Joyce (Chatterley). As her parents leave to prepare for Bethany's party, they instruct her that somebody will come to collect her later that evening.
However, they reckoned without the influence of Bethany's bad-girl best friend Olivia (Bryant) and her group of rebellious pals who whisk Bethany away for a surprise party in the now empty high school building.
As the youngsters party, they are blissfully unaware that Thorn is once again stalking the streets of Avondale seeking prey... but he has a dogged adversary of his own. 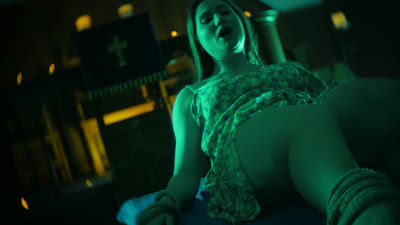 THE BEST BITS (mild spoiler warning): Regular readers of this blog will know I've got a real soft spot for Mycho's output, even ranking Hollower among my favourite films of 2016 and penning this glowing review for Slasher House II. The feats that Dixon and his crew achieve with such modest budgets are truly bewildering, and I'm delighted to say that Mask of Thorn continues Mycho's run of indie classics.
Needless to say, a familiarity with the previous entries in the Mychoverse will be rewarded (with a couple of familiar, albeit younger, characters making a return)  but perhaps the greatest achievement that Dixon manages is to make this story strong enough to stand on its own two feet. There will be no confused head-scratching from first time Mychoers here.
Dixon's script is intelligent and full of references to classic horror movies, especially the Halloween franchise. I  couldn't help but laugh at fellow critics who came down hard on Mycho's Cleaver as a mere Halloween rip-off. They had clearly missed the point — that the killer clown tale was actually an intelligent and well-intentioned homage to the grandfather (and arguably the very greatest) of slasher flicks. This continues (albeit more subtly) in Mask of Thorn — from the Halloween II-esque hospital opening sequence (which was among my favourites in the movie) right through to the black robed cultists of the later sequels.
However, that's not to say that Mask of Thorn does not deliver in its own right. While the story skips the intricate flashforward/flashback structure of Legacy of Thorn, it's still very intelligent and delivers some superb spooky moments.
The film looks great, and I was genuinely shocked to hear that it cost about half of the budget assigned to Legacy — this is a movie that looks polished far beyond its means, from clever Eighties set aesthetics (and costumes), right down to some shockingly gruesome gore effects. Let us not forget, that despite its more complex mythology, Mask of Thorn is a slasher movie first and foremost, and slashers NEED to deliver a bodycount.
This is certainly on hand in this latest Mychoverse offering, with Thorn rending helpless victims left, right and centre with his trademark over-sized machetes, or his bare hands. There's a sizeable cast of suitable cannon-fodder, which the bad guy makes short work of.
However, there are also plenty of well-rounded characters who give the viewer more than enough to root for.
Of course, a character is only as good as the actor or actress that brings them to life, and Mask of Thorn boasts a quartet of exceptional actresses in key roles.
Oliver brings a sweet naivety to our heroine Bethany. She's cute, likeable and portrays the character with a vulnerability that is key to gaining audience sympathy. She's certainly one to watch.
So too is the excellent young Bryant, who gives a real nuanced performance as Olivia, capturing her character's tough but loyal qualities brilliantly. Bravo, young miss!
Elsewhere the spiky Cashman (who Mycho fans might recognise from the spine-chilling short, In Tents) plays the baddest of bad girls Julia with plenty of attitude. She's clearly having a ball with her role and so did I! This is a fun character brought to life fantastically through a fun performance.
Finally, the exceptional Metherington is given plenty to do in her role and she is more than up to the task. She is absolutely great, and shows her full range throughout the film.
But it's not just the girls who deliver the goods here, there are some great performances fro  the guys too. I particularly liked Tribe's snarling tough guy act, while the icy buttoned-up work from Payne was also very impressive.
A lot of people seem to think that the role of silent slasher villain doesn't offer much of a challenge, but there are plenty of subtle touches required to make a memorable monster. Just look at how beloved Kane Hodder is with genre fans for his portrayal of archetypal boogeyman Jason Voorhees. These subtleties are not lost on Machiavellian who brings Thorn to life with a barely contained seething rage. He clearly gets how to do horror.
I've always loved the character design for Thorn, and with his hulking frame, cruelly grinning skull face and otherworldly glowing blue eyes, Thorn looks as badass as ever here.
The final thing I want to single out for praise is the awesome Eighties-style end credit track by HockeyMask Heroes. Bringing to mind power rock anthems such as Dream Warriors by Dokken, He's Back (The Man Behind The Mask) by Alice Cooper or Shocker by The Dudes of Wrath, it's not just a great theme, it's a cool track in its own right. There are a few faux Eighties tracks on the movies soundtrack and, to a child of the Eighties, all are quite excellent. Top work gents! 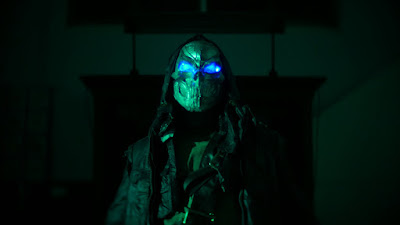 THE WORST BITS (mild spoiler warning): Mask of Thorn is an exceptional low-budget slasher movie. However, it IS a low-budget slasher movie. Movie accustomed to the glossy production values of Blumhouse's cinematic blockbusters may find the more rough and ready feel of most of Mycho's works a little jarring. This is a great movie, a top-notch slasher, but do please adjust expectations accordingly.
For the most part Mask of Thorn overcomes any budgetary constraints but every now and then there is the odd, very minor lapse.
The same came be said of the cast — while the standouts mentioned above really are quite wonderful, some of the other actors don't quite hit their lofty standards. There are no consistently poor performances, but every now and then some line deliveries feel a little stilted or wooden. Still, this is very much a rare occurrence and certainly does not serve to provide any severe hindrance to enjoyment of the movie.
Finally, while the movie certainly expands on the mythos of Thorn, it still leaves plenty of unanswered questions, and isn't really the origin story that some fans may be expecting. Here's hoping in four years time we'll be seeing Dixon's metal-masked monster return once more — I'd certainly be down with a Birth of Thorn or Cult of Thorn tale! 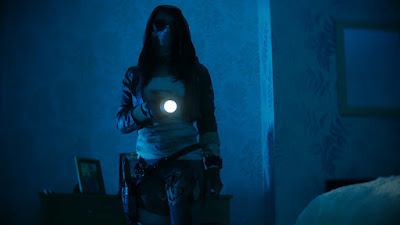 THE VERDICT: In the past I've said that I'd love to see a studio throw a big budget at MJ Dixon to see what he could do with those sorts of resources. Well now I've changed my mind.
Mask of Thorn is the latest in a long line of exceptional fright flicks from Mycho that show Dixon and co don't need an astronomical budget to deliver. I don't want studio executives getting in Dixon's ear telling him what to do, I want more of this talented director's work on his own terms. I want the much needed follow-up to Cleaver, I want to see Mychoverse: Phase Two featuring Slasher House II's villains, and, most of all, I want to see Red and the Demon settle their long-standing feud once and for all.
In Mask of Thorn we see everything that has made Mycho a genre fan-favourite. It's a throwback slasher with modern attitude, blood and guts with brains, and one of the very finest UK indie horrors in years. Highly, highly recommended.

Mask of Thorn will be released in 2018. Until then, why not keep up with any news over at the film's official Facebook page, which you can find here. Give it a like while you're there too, I'm sure the guys and gals at Mycho would appreciate it.

If you haven’t already, do please check out and Like the Hickey’s House of Horrors Facebook page, which you can find here. It gives you a nice quick link to any new posts on this blog, plus regular news updates from around the web. I check the Internet so you don’t have to! Alternatively, follow me on twitter: The House @HickeysHorrors
Until next time, I hope you enjoyed your stay.
Posted by Hickey at 09:20 No comments: