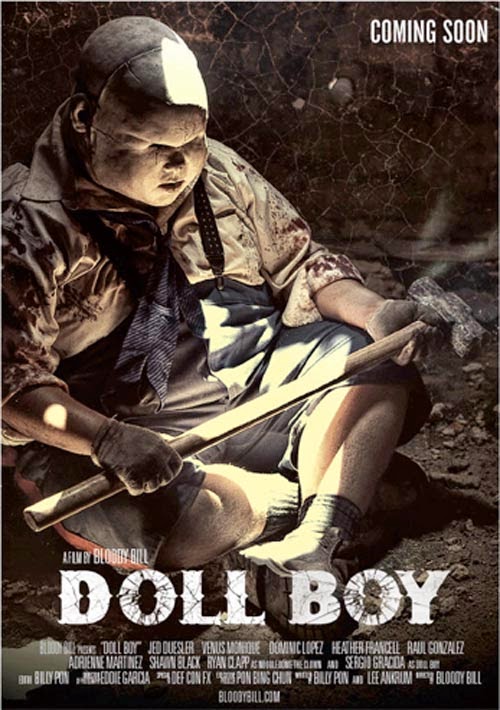 After my recent posts on great horror villains from the past decade and Circus of the Dead, I’ve had a few questions about the short Doll Boy. So I decided what better way to address them, than with a new review, one which is tailored to the short film format.
Read on to get the skinny on this West Texas slasher throwback.

SUMMARY: For most shorts I cover, this section will be very short, but as Doll Boy clocks in at half an hour, I feel I can explore the plot in a little more depth.
First, the short gets under way with two trailers, both of which were directed for contests by Billy Pon. The first for Circus of the Dead was for the Grindhouse Fake Movie Trailer contest back in 2007 and, while low budget, shows plenty of energy and certainly sets the tone for the carnage to follow.
The second trailer, however?
HOOOOO BOY! How can one best describe the sheer, unadulterated bad-taste glory of Mister Fister?
That’s right, Mister Fister — a serial killer who dispatches of his victims by donning a large armoured glove and… well, I’m sure you can work out the rest.
It’s insane, gory, vile and either the most hilarious or most disgusting thing I’ve seen in a long, long time. Probably both.
It was produced as part of the Hobo With A Shotgun Fake Trailer competition and truly must be seen to be believed.

And then Doll Boy starts, diving straight into the action as the maniacal Noodledome drives his yellow van through West Texan streets while Up Against The Wall, Redneck Mother blares over his radio.
We see the interior of his vehicle is filled with weapons — lots and lots of weapons. Oh, and a lunchbox for snacking. Well, spree-killing and abduction is hungry work!
Upon reaching the abandoned La Guadalupana Mexican flea market (handily identified by one of our characters later on) Noodledome parks up and slides open the door to reveal bound, cowering victims in the back.
He quickly grabs each of them, heaving them from the van and into the dark, cavernous building before locking them in and driving away... but not without one last disturbing look at what he’s taking with him to keep himself entertained.
From here the captured guys and girl inside the dark building are able to free themselves using a lighter and we are introduced to kindly Mr Newton, dorkish Sean, handsome Raul, feisty Angela, pretty Venus, traumatised Lorie and (my favourite) the massive prick that is Brandon.
While everybody reveals that they were snatched from their workplace and lost several colleagues, friends and, in one person's case, a husband in the clown raid, Brandon spends his whole time bitching about losing his expensive watch. Hahahaha, what a wanker!
After the briefest of expository scenes, the gang find a box of convenient torches — and then they find the other person within the maze-like building.
Doll Boy.
He’s big, silent, vicious and by god, if he gets you cornered he will beat your brains out with his sledgehammer — something he demonstrates most effectively upon arriving on screen.
Needless to say, the hapless abductees are all terrified when they witness Doll Boy’s handiwork and promptly flee deep into the building, scattering in their panic.
The rest of the short follows our rapidly dwindling group of survivors as they seek an exit from Doll Boy’s lair, nattily decorated with as much creepy shit as has ever appeared on screen at once.
Think circus toys, eerie gramophone records, flickering projectors showing vintage black and white cartoons, jars of who knows what biological matter, religious paraphernalia and what is left of all the big boy’s previous victims.
As Doll Boy’s attacks come with increased regularity and ferocity, the story (written by Pon and fellow CotD collaborator Lee Ankrum) takes some surprising twists and turns, especially with the order in which characters meet their maker, and plenty of high-quality practical gore effects before reaching its grim conclusion. 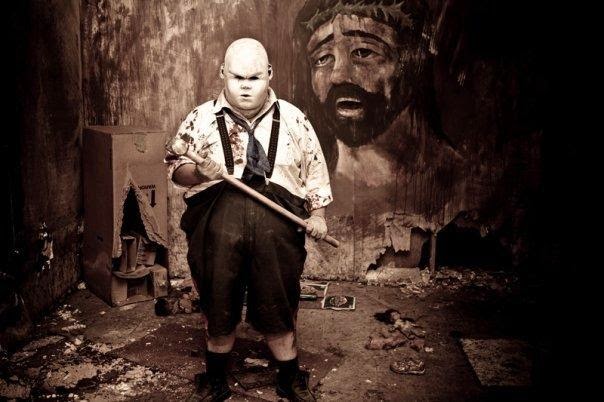 WHY IT WORKS: This short works in the ways in which any other great slasher works — a compelling group of protagonists, a monstrous antagonist, good gory kills and a well-shot, well-directed, atmospheric location.
Doll Boy doesn’t re-invent the wheel, but what it does do is show a loving respect to its slasher forebears and the audience.
The acting is a little spotty in places, but the brisk pace means many of the characters are smashed and bashed into the afterlife long before they can grate. However I will single out Dominic Lopez as the caring Mr Newton and Jed Duesler as the dickish Brandon for special praise. These guys were ace!
Which brings us to the villain that Newton, Brandon, Venus, Raul and the gang must cross paths with — the titular Doll Boy. He doesn’t appear to be much more than a large, mentally disturbed man with tastes that vary from childlike to psychotic, but that was enough for him to make my 13 great horror villains of the last decade.
His design is superb, a hulking, brutish psychopath in childlike garb, with a legitimately creepy babyfaced mask and, most importantly, a hefty and gore-soaked sledgehammer — making him a smasher, not a slasher. He’s a man of few words (none, in fact) but his actions more than make up for it.
Quite who he is, why he’s there and the exact nature of his partnership with Noodledome the clown remain a mystery, but perhaps some of these questions will be answered in Billy Pon’s follow-up effort, Circus of the Dead? I couldn’t possibly comment...
As for the amazing and atmospheric La Guadalupana setting — I’d go so far as to say that it becomes a character in its own right.
Much like the basement in Cabin In The Woods or the abandoned medical facility in Creep, this place is a gallery of the macabre, filled with all manner of gloriously hair-raising props.
After just one quick look it becomes all too obvious that director Billy Pon has gained masses of experience with his successful haunted house attractions over in Texas. In fact, Doll Boy himself is one of the characters that visitors can expect to terrify the living day lights out of them each and every Halloween. How cool is that?
The kills are all well done, they are gory and there is plenty of blood and brains splattered across Doll Boy’s pristine white mask. Furthermore, the effects work is marvellous and all practical too. Hooray!
Finally the short’s brisk run-time really works in its favour, cutting straight to the chase with its smash and bash action. There's no wasted dialogue and no extraneous scenes, just good, lean storytelling.
If you’re a fan of good old-fashioned horror fare, such Halloween or Texas Chain Saw Massacre (both of which were influences on this short according to Pon), check Doll Boy out. You’ll be glad you did.

DIALOL: ‘That psycho cabbage patch dude crushed his head!’
‘I’ll tell the coroner to give you a tetanus shot... Right after she’s done scraping your brains off that nutjob’s hammer!’
‘I don’t habla the jibber jabber!’ 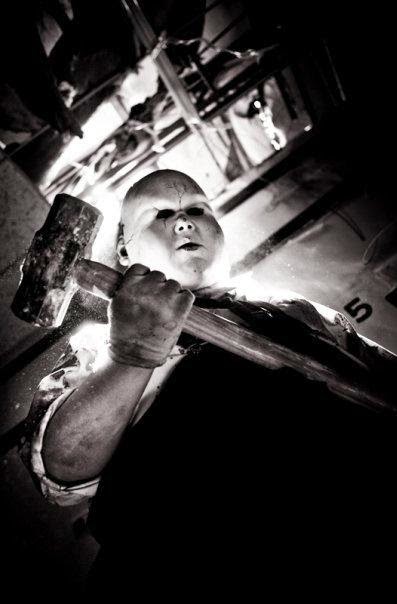 SO WHERE’S IT AT? Your best place to get hold of this short is straight from director Billy Pon’s own web page, bloodybill.com
You can also pick up some other great merchandise including a fantastically dark and grim colouring book. Sick and superb, Mr Pon. Sick and superb!

10 WORD WRAP UP: Mister Fister, then classic slasher action make this a winner

Until next time, I hope you enjoyed your stay.
Posted by Hickey at 01:31