RAW REVIEW: LOVE IN THE TIME OF MONSTERS

I absolutely love indie horror. Outside of the constraints of big studio interference filmmakers are able to reach for the stars and take as big a risk as they like. Formula is discarded, safe options are snubbed — in short, the only restrictions are the imagination of the filmmaker and that whole pesky little budget thing.
By far one of the most batty premises I've come across recently was that of the highly-regarded indie horror/romantic-comedy hybrid Love in the Time of Monsters. With real imagination and roles for two of the very best actors in the genre today (top creature performer Doug Jones and Jason Voorhees himself, Kane Hodder) I was pretty damn excited to sit down with director Matt Jackson's movie.
Would fall in I love with it? Or would this one turn out to be a real beast?
Read on… 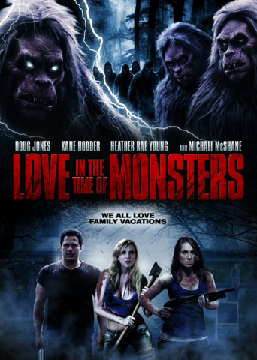 SPEEDY SYNOPSIS: I'll try not to spoil too much here but read on at your own risk.

After experiencing tragedy earlier in their lives, sisters feisty Marla (Shaw) and sweet Carla (Skell) have a strong bond. After Carla's fiancée Johnny (Carter) starts work at a cheesy tourist trap resort run by the larger than life Uncle Slavko (McShane), the girls decide to surprise him with a visit. Using their friendship with manager Agatha (Rhodes) to secure a room, the girls soon set about enjoying the entertainment, including kitch dancers Big Kahuna (Palacios) and Brandi (Young). However, unbeknownst to the ladies Johnny and his Bigfoot costumed colleagues lead by tough, no-nonsense Lou (Hodder) have been exposed to a lethal cocktail of toxic waste that has transformed them into animalistic, flesh-eating mindless monsters.
Soon the sisters find themselves fighting for their lives alongside local oddball Chester (Armstrong) and several staff members including Slavko, his wife Marianna (Shaw), Big Kahuna, Brandi, sharp-tongued barman Armando (Vasquez) and the resort's physician Dr Lincoln (Jones). What exactly has caused this startling transformation? Who will survive the savagery of the deranged Bigfoots (Bigfeet)? And can Carla and Johnny's love survive?

THE BEST BITS (mild spoiler warning): Well, Love in the Time of Monsters is one insane movie! The premise gives a perfect excuse for some decidedly and deliberately hokey looking costumes, and the ragtag group of misfits forced to pull together for the common good are excellently written. Perhaps the strongest point of LitToM is the razor sharp script by Michael Skvarla. This is a large cast but each character is given their moment to shine. More importantly, despite the somewhat goofy storyline, it has a massive amount of heart. At its core, this is a story about relationships — the strained but unbreakable bond between Marla and Carla, the idealistic romance between Carla and Johnny, the fiery interaction between Marla and Armando, even the lost love between Chester and Marianna and the awkward triangle this causes with Slavko.
There are some genuinely moving moments in among the splatter and gags, which really adds to the viewer's emotional investment in the movie. Obviously the jokes rely on performers with the right comic timing and acting chops — and this is a cast that are uniformly superb.
The female leads Shaw and Skell are excellent. These are two very attractive ladies, sure, but they are also great actresses. Shaw bristles and snaps her way through the film, stealing a lot of her scenes as the more damaged and spiky sister. She has some very funny moments, but underneath them there's a sadness that makes her far more likeable than she should be. It's nuanced and impressive work — I for one cannot wait to see more from her.
Skell's may be the less flashy role, but it carries a significant emotional weight. Given the fact that she shares very little screentime with Carter in which he isn't playing a drooling bestial monster, the work of establishing their relationship falls squarely on Skell. She is more than up to the task and she shows an impressive range as she runs the gamut of emotions. She's all too easy to fall for and is definitely one to watch in the future.
The prolific Rhodes gives an assured and witty performance (as always) and the big surprise for me was the work of the stunning Young. A former Playmate, it's easy to assume that she's just been included for eye-candy but she really nailed her role. I'd like to see her continue to work in the genre as she has serious scream queen potential. Finally veteran Weatherly is wonderful as the torn wife of shady Slavko and does a fine job with her handful of scenes.
Of course, it isn't just the ladies who nail their performances. The hilarious McShane makes Slavko a real must-watch and the OTT cheesiness of Palacios' Big Kahuna brings some big laughs to proceedings. I was also very impressed with the broodingly handsome Vasquez. His character has a clear and defined arc and he makes it work every single step of the way. At times a massive, self-serving jerk he still manages to keep you onside as you find yourself rooting for him to redeem himself. Does he? Well, you'll have to watch the movie!
Of course, the biggest names for horror fans are those of Doug Jones and Kane Hodder. Hodder is excellent, playing a fairly subdued and grounded character as the likeable head of the Sasquatch workers early on in the film. However, it's after he undergoes the chemically-induced metamorphosis into a monster that he really shines. If you've seen any of the movies in which Hodder kicks ass as a hard-as-nails villain you know exactly how imposing he can be and this is role that allows him to display his trademark daunting physicality. Scary stuff indeed!
Jones on the other hand avoids his usual heavy creature make-up and plays a far more straight forward role as the 'handy-for-exposition' Dr Lincoln. Much like Clown, this is a case of the filmmakers making their 'expo-dump' character one who is A) interesting and B) a bloody good actor, which is vital in keeping an audience onside if there are going to be lengthy explanatory monologues. We all know that Jones is an excellent physical actor, but this role just goes to show how well-rounded he is, delivering a likeable and natural performance with a fun, laidback air. He gets to exercise his comic chops and he really is very funny. In fact, he could well be the best thing in the film. Kudos, Mr Jones.
There are plenty of laughs in store but, unlike a lot of horror-comedies, this brings the horror too. Jackson is able to lay down a cracking air of ominous menace and some of the chase and attack sequences are real nailbiters. I was surprised at just how bloody and gory the 'Bigfoot' attacks were — there must be gallons of gore and grue on display. The effects team of Scott Fields and Carrie Hash have done some amazing work here, the gore effects are all fantastic. The effects work doesn't just stretch to gruesome wounds and dripping entrails — the latter stages of the movie include a host of fun creature effects (it's all about the zombie moose!) and a wonderful surprise appearance that I really should have seen coming.
Finally, despite any budgetary constraints from its comparatively low budget, Love in the Time of Monsters actually looks pretty damn good! Credit must go to Jackson and his director of photography Jorge L. Urbina for making the lush woodland look both beautiful and creepy at the same time and for bringing Uncle Slavko's All-American Family Lodge to life so wonderfully. 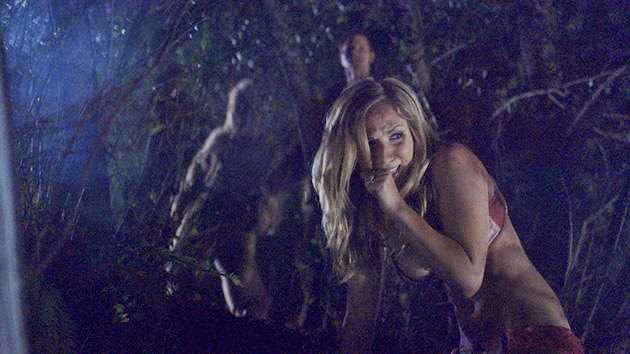 THE WORST BITS (mild spoiler warning): There is very little to find fault with in Love in the Time of Monsters. Some may find the odd-mix of tones a little off-putting (it does veer from hilarious to very, very bloody and back in the matter of seconds). Personally, I love a movie that keeps me on my toes, but if you don't, this one may throw you.
Also, if you're the sort of person that reads: 'An epic love story with toxic bigfoot zombies' and thinks ‘WTF?’ LitToM may just be a little too out there for you. However, as I said above, the film is so much more than that, much more about the characters than the admittedly iffy circumstances surrounding them, so I would definitely encourage you to try to look beyond the wacky premise. Of course, there's still plenty of toxic zombie bigfoot shenanigans for those of us who dig that stuff, so lovers of camp creature features of yesteryear will still get a kick out of it (and did I mention a zombie moose?)
Speaking of campy creature features, while I dug the hell out of the throwback creature effects, those of you expecting/demanding Jurassic World levels of effects would be better off  skipping this one. Obviously it doesn't have a big studio style budget for its effects work, but in comparison to a lot of indie genre flicks, these are pretty damn good and, most importantly, they totally match the bizarro tone and mood of the movie.
Finally, while I praised Hodder's role in the film I could have done with more of him. He's all kinds of awesome when it comes to scary badass villains, so it's a real shame that he gets so little screen time. Still a little Kane Hodder is better than none, am I right? 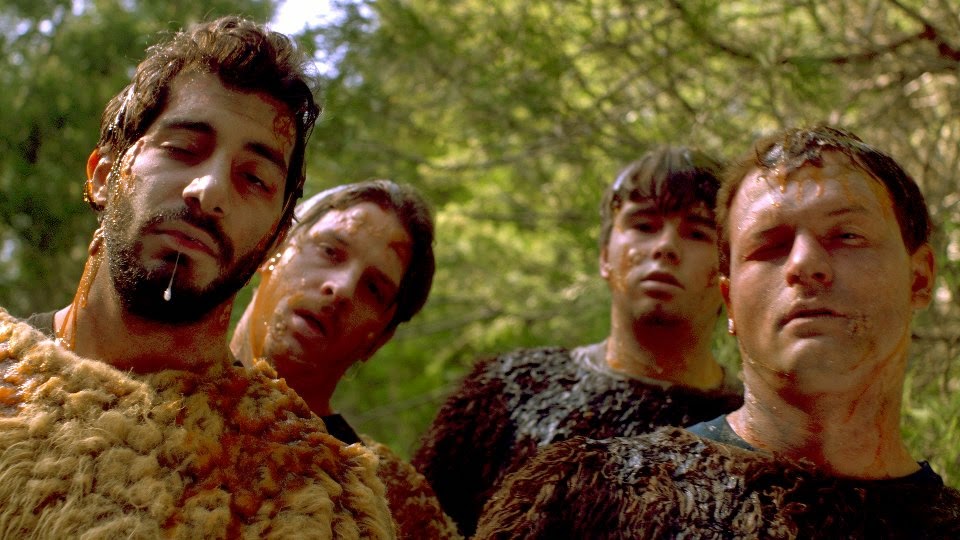 THE VERDICT: I'll be honest with you, before I watched Love in the Time of Monsters I thought it would be a bit of fun in the 'so bad, it's good' mould. And, yes, it certainly is fun. What I didn't see coming was just how good it would be. It's got heart, laughs, scares, a fantastic cast, wonderful writing, romance, assured and competent direction AND a zombie moose. Now, I'm not saying this has something for everyone... hang on, that's exactly what I'm saying. Love in the Time of Monsters is a brilliant fun flick and I recommend it wholeheartedly. This is not one to miss!

You can pick up a copy of the movie, either on DVD or as a digital download at the film's official site right here. Be sure to visit the movie's official Facebook page for more news and information. Give them a Like while you're there too!

If you haven’t already, do please check out and Like the Hickey’s House of Horrors Facebook page, which you can find here. It gives you a nice quick link to any new posts on this blog, plus regular news updates from around the web. I check the Internet so you don’t have to! Alternatively, follow me on twitter: The House@HickeysHorrors

Until next time, I hope you enjoyed your stay.
Posted by Hickey at 07:21