The fantastic thing about social media (well, other than the great way it allows millions of tedious people to tell us all what they're having for dinner) is that it allows talented creative types to spread word of mouth about their projects without needing a big studio's megabuck advertising budget.

I discovered Tom Ryan's Faces through Twitter. He was looking for reviewers, I was looking for titles to add to my review list and so the match was made.
The discovery of the film was entirely fortuitous — but would this be a view I would still hold after watching it?
Read on... 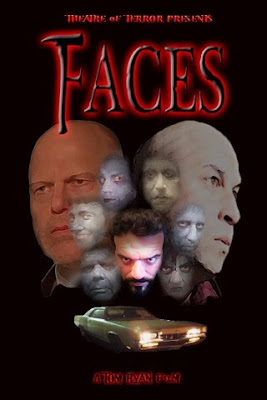 SPEEDY SYNOPSIS: I'll try not to spoil too much here, but read on at your own risk.

Frank (Ryan) is a down-on-his-luck individual who is struggling to get his life on track. He has fallen behind with his rent payments to landlord Jose (Schorr) and is out of work. Following a disastrous job interview with smug businessman Henry Benson (Young) we realise the source of Frank's job seeking woes — he has recently been incarcerated. Now he spends most of his time in a local dive of a bar, surrounded by losers such as big-mouthed Charlie (Gmitter) and pining after barmaid Connie (Pozycki) even though it is his neighbour, Beth (Demko) who is keen on him.
At the end of his tether, Frank throws his medication away... with shocking consequences. But as Frank's life spirals out of control he finds himself making an unconventional group of friends and confidantes, a group who are able to guide and advise him on how to improve his lot, even as he descends deeper into insanity. 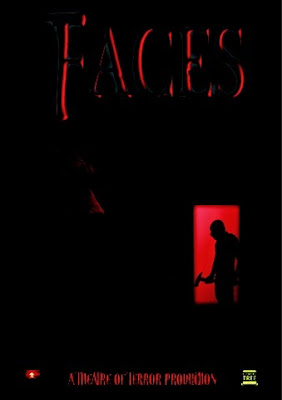 THE BEST BITS (minor spoiler warning): I really don't want to ruin the surprise of one of Faces' finest scenes, so I shall keep this as vague as possible. But to me, the film's biggest strength is easily the imaginative premise. The movie starts off like so many other gritty thrillers, but when it does take its sudden, unexpected detour into the bizarre it really takes off. The 'gimmick' (for want of a better term) is truly original, unlike anything I've ever seen before and both darkly disturbing and, at times, bleakly humorous. I do wish I could discuss it more, including some of the excellent scenes that it leads to, but this really is a surprise best experienced for yourself.
Ryan's astonishing script (that's right, he wrote, directed AND starred in the movie) is proof that, with a bit of imagination, low-budget indie film-making need not equal low-quality.
I've praised the originality of Ryan's writing and how it elevates Faces above the majority of indie fare, but another place it succeeds is in the strong characterisation and dialogue. In Frank we have an interesting, compelling but frightening protagonist and the rogues gallery that surrounds him each contribute to the tale. Each character serves a purpose to the story and each line they speak adds something else to the plot, whether it be to further the progression or to hint towards the film's inevitable conclusion.
The characters are flawed, grittily realistic without overplaying their sordid everyday nature, and as such, all the more capable of capturing and holding your attention.
This is certainly helped along by the fact that the cast are pretty good.
I especially want to compliment Gmitter, whose Charlie is a wonderfully realistic weaselly wiseass. He completely gets his character, bringing just enough sarcasm and niggling snappiness to his lines without overstepping the mark and turning Charlie into an completely unlikeable bastard. I've not seen Gmitter in anything else, but his performance here was more than enough to make me keen to see more from him in the future.
I also liked the excellent Demko in her role of the smitten Beth. She brings enough to the role to get you onside, coming across as dreadfully sad rather than an irritating and desperate doormat. Later on in the film, when she is given her moment to shine, you can't help but root for her, which shows she was clearly doing something right.
As great as Gmitter and Demko were (not to mention Young's topnotch turn as boorish dickhead Benson),  it was the multi-talented Ryan’s performance as Frank that stole the show. Ryan was brilliant in the role, exuding a sad desperation earlier in proceedings, then revealing flashes of the angry, raging monster within. His furious and demented axe attacks are savage and frighteningly realistic and his slowly more unhinged demeanour as the film progresses is wonderfully realised. However, even as he becomes more of a monster, Frank is still damaged and Ryan keeps him sympathetic by adding an air of vulnerability to his performance. That so many of the characters he crosses paths with are such thoroughly horrid individuals means you can sort of understand his actions, even if you don't have the stomach for them. In this regard, Ryan's Frank reminded me of a cross between Michael Douglas’s man pushed to the edge, William Foster, in Falling Down crossed with Elijah Wood’s haunted and disturbed Frank in Maniac. This is a great character brought to life by a fantastic performance from a very talented actor.
It's not just the characters that bring the story to life, but they way in which it is shot. The film is low-budget, but Ryan and his team don't let that stand in their way, keeping the film as polished as possible and never forsaking professionalism. It looks good and sensibly never tries to do too much with too small a budget. There are a couple of effects shots but nothing too ambitious and, for the most part, these work. Smartly a lot of the violence and gore takes place off camera, instead relying on suggestion and Ryan’s ferocity in the role to conjure up some horrifying mental imagery in the minds of the audience.
Finally it would be remiss of me to not mention the fantastic rock soundtrack to the movie. With a number of kickass, hard-rocking tracks that really add to the grungy, indie mood of the film, this is a soundtrack CD I'd buy at the drop of a hat. Great stuff! 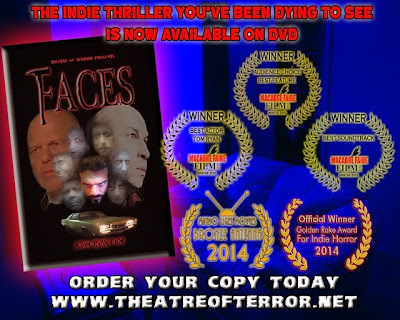 THE WORST BITS (mild spoiler warning): Well, let's get right down to it. This is a low-budget indie horror flick and while the folks over at Theatre of Terror have done a great job with what they had, it's still subject to a lot of the problems inherent in this type of picture.
It looks pretty good, but certainly isn't as polished as your typical big studio horror flick. It's unrealistic to expect those kind of production values, but for those of you only accustomed to horror along the lines of Annabelle, The Purge or Insidious, you may well have some issues with Faces. Personally, I found this added to the grittier, edgier feel of the movie.
While I mentioned that the effects was mostly pretty good, there were a couple of rare occasions featuring the film's gimmick that dipped below par. The make-up was cool in the majority of cases but every now and then the quality slipped and hindered my suspension of disbelief. With a budget as small as this movie's that is only to be expected, so perhaps it is a bigger compliment than criticism when you consider just how rarely this lack of funding effected my enjoyment of the film.
The sound quality was also effected a couple of times, with that slightly hollow, echoey edge to a couple of scenes. Thankfully these were few and far between and even when they did crop up it didn't interfere with my ability to understand the dialogue.
Finally, while I said that most of the cast were pretty good, there were a couple of rare exceptions. The lack of experience showed for some of the actors in the films and a couple of times even those with whom I was impressed delivered the odd clunky or unrealistic line. I think this may well have been down to budget once again as I don't imagine there was much in the way of time or cash for multiple takes on scenes. Thankfully these off moments were pretty rare and never came during moments when a stilted performance could have derailed the flick. For this we should most definitely be grateful. 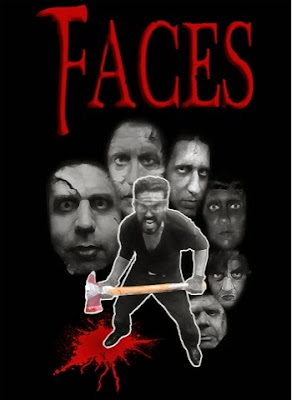 THE VERDICT: Imagination, dedication and enthusiasm. These three qualities can elevate a movie above its modest production values into something special — and the team behind Faces has all three by the bucketload. I want to personally congratulate Tom Ryan on what he's done here, in creating a genuinely great film that is able to turn pretty staid formula (disturbed man on the edge reaches breaking point) and turning it into something that feels fresh, exciting and, above all, thoroughly entertaining. Forget the budget, this film is all the proof you need that some exciting, smart and immensely talented individuals are plying their trade in the indies right now. This is one of the easiest recommendations I've made in some time — Faces is a genuinely great movie.
Faces is still doing pretty well on the festival circuit, but, sadly, if you were to want to purchase a DVD copy of the movie Theatre of Terror have completely sold out (word of mouth has been pretty much universally positive), but keep an eye on the studio's official Facebook page for any updates on if/when it may be available in the future. In the meantime, give them a big old Like to show some support to some hardworking, imaginative producers of top indie horror.

Until next time, I hope you enjoyed your stay.