With the exciting news that all my UK readers will get the chance to check out Tommy Faircloth’s great retro slasher, Dorchester’s Revenge: The Return of Crinoline Head this June at the upcoming RIP Horror Film Fest in London, I thought now would be a perfect time to dive in to Faircloth’s back-catalogue.
This led me to his highly-acclaimed short, Horse Creek Productions’ The Cabin. Would this 30-minute chiller with an appearance by Dorchester’s Revenge: The Return of Crinoline Head’s Jason Vail match that movie’s success?
Read on… 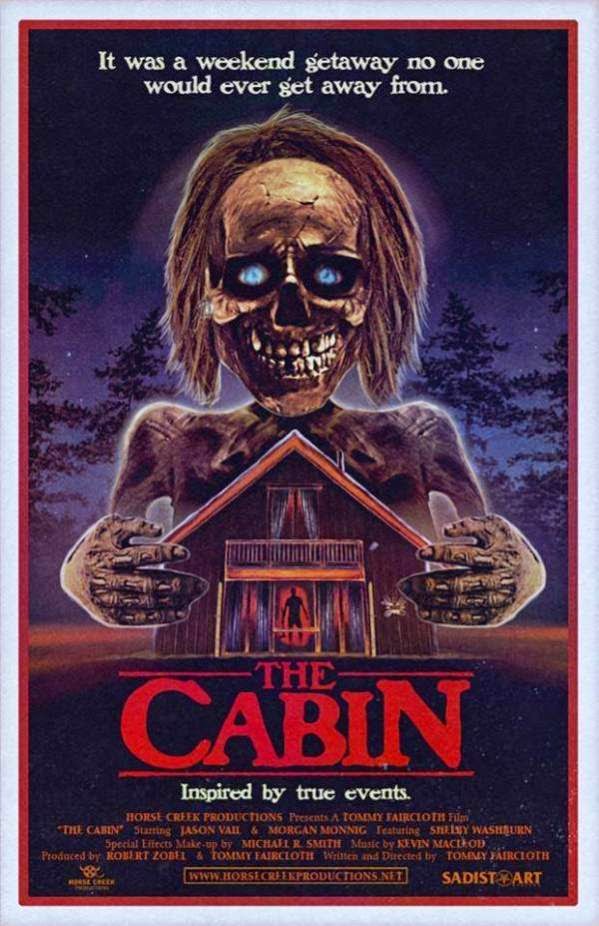 SPEEDY SYNOPSIS: I’ll try not to spoil too much here, as it is only a short film, but read on at your own risk.

Single Laura (Monnig) is looking for love and meets the mysterious John (Vail) through an online dating site. Despite warnings from her friend Ashley (Washburn), Laura agrees to travel up to John’s isolated vacation cabin after just a few dates.
After an ominous journey up into the mountains (complete with a story about the disappearance of John's parents when he was just a teenager and foreboding missing persons signs) they reach the titular cabin.
At first all seems well, but then John’s overly gentlemanly behaviour starts to become a little unsettling.
Laura starts to wonder whether Ashley may have been right or whether it is her own nervousness that is causing the problem.
Then she finds herself drawn to the basement crawlspace... 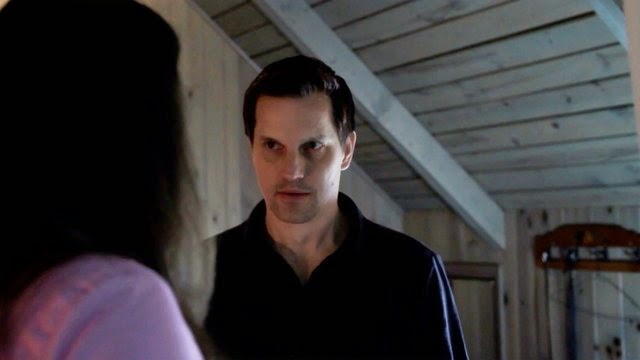 THE BEST BITS (Minor spoilers): Much like Dorchester's Revenge, The Cabin is a simple horror tale told well.
Faircloth impressed me with his direction in that feature length effort, I'd argue that this short is an even better display of his talents. The film is shot marvellously, the countryside and the cabin itself used as artistic backdrops to the action.
Not that this is a film full of action — no this is a good, old-fashioned story based far more on mounting tension and psychological scares than blood, guts and shrieking strings accompanying cheap jumps. It does boast a couple of great jump scares, but these feel earned and serve to ratchet up the atmosphere of dread nicely.
The film also deserves praise for the lovely bit of thematic depth added with its literary reference. Naming the cabin Chanticleer after the Middle Ages fable made famous by Chaucer is a beautiful touch. SPOILERS********** The ending of the short makes the references to the story of a cockerel fated to be seized by the throat by a cunning, deceptive predator all the more apt SPOILERS END**********
Of course, the story and direction can fall flat if the faces of the story, the cast, aren't up to scratch. In The Cabin, they most definitely do hit the spot.
Essentially a two person cast, both Monnig and Vail nail their roles. More real than the unfeasibly plastic and pretty teens of most Hollywood productions. Monnig seems more mature, less like a stupid high school victim and more like a woman who has looked at the situation and made a real choice. Laura is a character who has taken a calculated risk to find love, not an oblivious moron. Monnig is likeable in the role and completely capable of meeting every demand that the role requires.
When I reviewed Dorchester's Revenge I lamented the lack of screentime afforded to Vail. Thankfully in this short he gets plenty. Both charming and unsettling in equal measure, Vail’s John is like Ted Bundy — seductive, affable but creepily cold and distant at the flick of some mental switch. Vail just GETS this role and completely owns it. You can understand exactly how Laura could have fallen for him, but equally before long you find yourself wanting to scream at her to get far, far away from him. Vail is clearly a very, very talented guy and he and Faircloth seem to work magic together. I cannot wait to see them collaborate again.
Finally I feel the soundtrack very much warrants some attention. The score is great, perfectly complementing the atmospheric visuals and really building on the mood of the short. It positively thrums with tension — and when the big scares hit, it is more than up to the task. 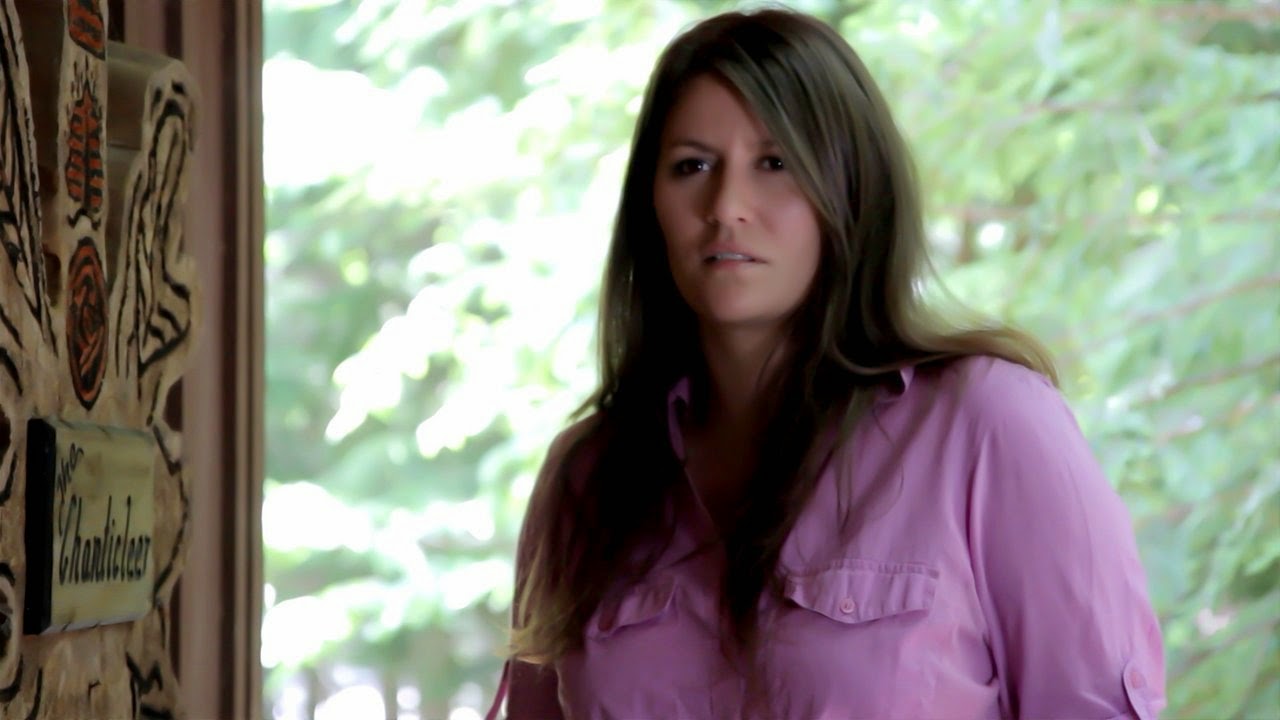 THE WORST BITS (Minor Spoilers): I praised the no-nonsense, back-to-basics nature of The Cabin earlier, but that brings its own pitfalls. The story is somewhat linear, many viewers may find themselves waiting for a killer twist (no pun intended), that never materialises. There is very little mystery over whether John is actually a villain — the nature of the short and the genre in which it is based suggests that one of our two leads is going to be doing something pretty terrible and the other is almost certainly going to be on the receiving end. Instead the short becomes an exercise in atmosphere as it leads to a pretty inevitable conclusion. The abrupt manner in which it reaches that end (the film is just 30 minutes after all) exacerbates this feeling. This really feels like a case in which extending the film out into a feature would have helped it. By adding a few more twists and turns on the way to the admittedly very powerful ending, it could have enhanced the film.
Also, while I thought the vast majority of the writing in The Cabin was really very good, the early scenes featured some quite heavy exposition that at times led to some borderline clunky dialogue. Once again, a longer runtime would have given the plot a little more breathing room and allowed the key information to be dropped on the audience at a more leisurely pace.
However, I think it’s quite telling that the biggest flaw I have with this short is that I wanted more of it! 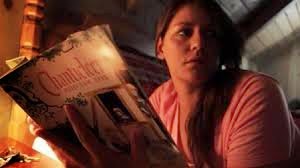 VERDICT: Make no bones about it, The Cabin is a great watch. It is a fantastically made film and has quite deservedly picked up plenty of awards along the way. Faircloth’s assured direction combined with two great leads make this a real treat. Atmospheric and intelligent, it is a well-crafted sharp shot to the nerves and will have plenty of single ladies feeling all the more nervous before that first date with a man met online. It serves as modern day cautionary parable and entertains while creeping under your skin.
Now for the real shocker — amazingly Tommy Faircloth has told me that The Cabin was filmed in just TWO DAYS in three states. That really is quite the achievement!
This one, horror-fans, is an easy recommendation.
If you choose to catch it, get yourself over to Vimeo where it available to rent or purchase as a download for a very fair price. Go for it, you won’t regret it. And while you’re at it, why not hit the Horse Creek Productions Facebook page and give it a like?

Until next time, I hope you enjoyed your stay.
Posted by Hickey at 11:37