It's been far too long since I covered a fun horror short here at the House. These tend to get fewer readers than my feature reviews, but I have no intention whatsoever of cutting shorts from my genre coverage because, as I've said before, short films feature some of the most talented, imaginative and downright brilliant up-and-coming horror filmmakers.
In recognition of this fact, this weekend's Film4 FrightFest is featuring not one, nor two but THREE short film showcases with a dizzying number of titles on display from all around the world. Joining the likes of the amazing El Gigante (which I reviewed before, right here) is Shant Hamassian's Night of the Slasher, a self-aware horror tale with a fresh slant on the 'dead babysitter' genre.
Intrigued? You should be. 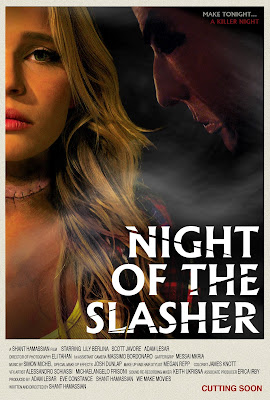 SPEEDY SYNOPSIS: This is a short so I'll try not spoil too much, but read on at your own risk.

Jenelle (Berlina) is a pretty, but troubled young woman who seems determined to carry out the most self-destructive course of action she can. Hard drinking, abusing drugs, even meaningless, unprotected sex with her sweet but dorky classmate (Javore), Jenelle seems hellbent on making the worst decisions possible.
However, Jenelle hides a dark secret, as evidenced by a large and unsightly recent scar across her throat. What caused this gruesome injury? Has it finished with Jenelle? And more importantly, is Jenelle done with it? 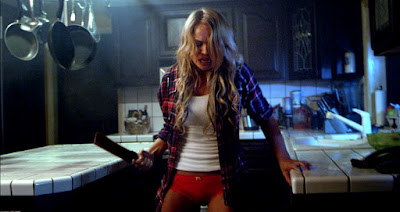 WHY IT WORKS: Ever since the smash-hit success of Scream, meta-slasher flicks have been all the rage. Scream heralded in a new era of slasher in which pop-culture savvy teens idly discussed the unwritten rules of horror movies, all while falling prey to a mysterious masked maniac, an idea expanded upon in the amazing Behind the Mask: The Rise Of Leslie Vernon. Night of the Slasher takes up that mantle and spins it off into a new and exciting direction. It's full of that self-aware genre introspection, but this time turns it into a key part of the plot rather than window dressing.
The story, written by director Hamassian, seems simple and fun at first, an easy way to wring some humour from in-jokes that fans of genre classics such as Halloween will gobble up. The humour is certainly there, however, as the story progresses it transforms into something far richer, with a lot more nuance.
I've had the pleasure of communicating with the very amiable Hamassian and he informs me that this short is actually just a segment of a far longer script that he intends to film at feature length. The sheer amount of thought and creativity in this script makes it clear that that the story has legs far beyond this brief (but satisfying) 11 minute runtime. That isn't to say this feels undernourished or truncated, far from it, it just has a lot more depth than many other genre shorts.
Nowhere is this more apparent than in the characterisation of the lead. At first a clichéd traumatised bad-girl, it soon becomes apparent that Jenelle is so much more. Irreparably changed by her own brush with a monster, she has transformed into something every bit as dangerous in her own quest. This is very smart writing, bringing to mind kick-ass horror heroines along the lines of Buffy the Vampire Slayer, Cassie Hack from Tim Seeley's brilliant Hack/Slash comic series or the enigmatic Red from the Mycho film Slasherhouse (a review of which shall be appearing here very soon). The characterisation is undoubtedly helped by the tremendous work of Berlina in the role. She's a fantastic scream queen in the making, showing plenty of range — from hard-eyed, tough-as-nails slasher-slayer to vulnerable, heart-broken victim, she does it all — and it certainly doesn't harm her cause that she is such an attractive young lady. When Night of the Slasher takes the leap to feature-length I really hope Ms Berlina returns for the ride.
Of course, Berlina isn't the only actor in the film to deliver the goods. Javore lends great support as The Bait (no prizes for guessing what might happen to him). Softer and more vulnerable than the battle-toughened Jenelle, Javore's character gets to add a more human character with whom to sympathise. He's nerdy, dorky, clearly unpopular with his peers, but he's also decent, gentle and thoughtful — something that probably can't be said for our heroine.
Javore also gets to add to the levity, delivering some rib-tickling lines with superb comic timing. His line about getting teased by his fellow high-schoolers for looking like he's 30 is a wonderful in-joke at the expense of some of the less convincing 'Teen' characters in Eighties slasher classics.
As good as this gag was, my favourite genre in-joke of the whole film was in the appearance of the titular Slasher. Those of you who know the story behind the iconic Michael Myers will be sure to take as much pleasure as I did upon seeing that Lesar's silent maniac is sporting a Star Trek Spock mask painted white. THAT is genius right there, readers.
Speaking of Lesar's killer, he is another member of the cast that impresses. His is a role without dialogue but he has mastered the art of creepy body language. From the trademark detached amble of the Eighties slasher villain to sudden frenzied violence, Lesar brings his character to life in a nightmarish manner.
That may come across as rather surprising considering how strongly I've stressed the humour in the plot, but while there are plenty of laughs, this is still a horror short. The jokes are there but expect plenty of chills and thrills. There's some pretty spectacular violence and some nice moments of creepiness (Lesar's rolling, crouching shuffle is decidedly unsettling).
Now for one key detail that I've decided to hold on to until this point — the entire film is shot as a continuous take.

Read that again, I can wait.

That's right, while the 11 minute film contains plenty of movement and some decidedly complex sequences, the entire film is presented as if it is one single take. Now, I can't confirm that it was all definitely shot in one go, but if there are any cuts they are masterfully hidden — itself a tremendous achievement, as evidenced in the iconic opening scene of the aforementioned Halloween. This gives the entire film some added dynamism and transforms it from a tremendously clever idea on paper to downright magnificent film-making. Getting past the technical aspects of superb lighting and framing that must have taken FOREVER to plan out, it also turns the film into a real white knuckle thrill ride. The constant and relentless camerawork echoes the unflinching and icy determination of the slasher, injecting a sense of realism as well, making the audience feel as if they are there witnessing the events of the film as they unfold.
With tonnes of imagination and wit in the script, it's truly a joy to see that same level of ingenuity on display in the filming process as well.
It may sound like I'm over egging the pudding here but trust me, Night of the Slasher offers a fine example of the type of gifted talent currently plying their trade in short films at the moment. This is the type of film that horror fans will love — you really would be daft to miss it.

SO WHERE'S IT AT? The film is currently working the festival circuit, so check out the film's official Facebook page for more information as to where you can catch it, further updates on a web release or the eventual feature. Fingers crossed that'll arrive sooner rather than later!


UK readers planning to attend the Film4 FrightFest will be delighted to hear that the film will playing on Discovery Screen 2 during Short Film Showcase 3 on Monday 31st August.
10 WORD WRAP UP: A brilliant concept executed flawlessly, this is a must see

If you haven’t already, do please check out and Like the Hickey’s House of Horrors  page, which you can find here. It gives you a nice quick link to any new posts on this blog, plus regular  from . I check the Internet so you don’t have to! Alternatively, follow me on twitter: The House@HickeysHorrors

Until next time, I hope you enjoyed your stay.
Posted by Hickey at 02:39