Of all the uniquely American monsters, few have caught the imagination of the general public like Bigfoot.

Yet decent Sasquatch flicks are as rare as sightings of the creature himself.
Regardless of your opinion on the existence of the beastie (and I'm sure the number of you who actually believe is pretty tiny), I'm sure you can all see the monster movie potential for a gigantic, powerful, fur-covered monster dwelling deep in the heart of the backwoods.
Which brings me to Stomping Ground. This low-budget flick heads out to the depths of the North Carolina forests to give us another take on the legend that refuses to die.
Is this one Big fun? Or is it another backwoods blowout?
Read on... 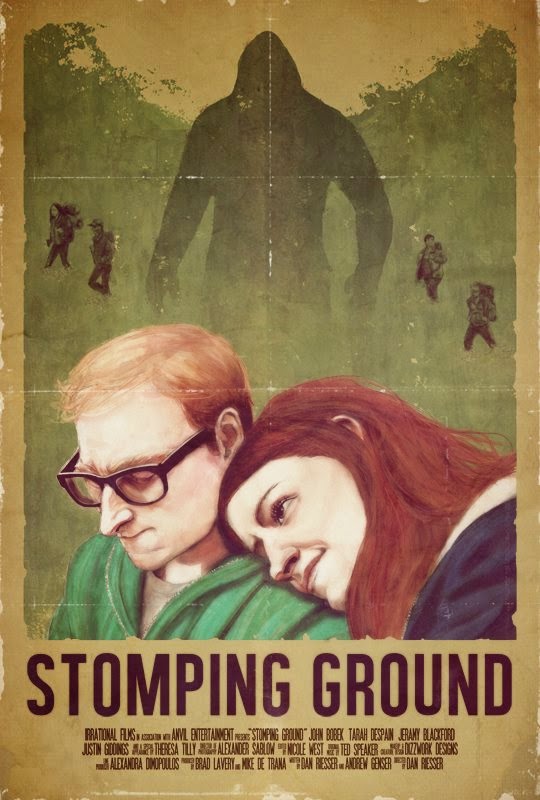 SPEEDY SYNOPSIS: The film opens with Southern girl Annie (DeSpain) taking her Chicago-born boyfriend Ben (Bobek) back to her small hometown.
After a quick introduction to her family, Annie and Ben hit the local bar and catch up with her old friends. Ben is very much a fish out of water but he makes a game effort to fit in, however the night soon takes an excruciating turn when Annie's ex-boyfriends make themselves known, including Paul (Blackford).
After an evening of heavy drinking, including some brain-cell destroying moonshine, and a series of revelations about his girlfriend, Ben ends up the worse for wear. He is astonished to hear that Annie and her friends used to go on Bigfoot hunting camping trips when they were young, so, judgement impaired by the booze, he agrees to go on a trip with them.
The following morning he heads out into the forest with Annie, Paul and likeable amateur Sasquatch expert Jed (Giddings) with a plan to meet more friends out at an isolated ridge.
As the camping trip progresses Ben learns about local legend, Boojum, the Sasquatch said to roam the woods and even more about Annie, principal among which are Paul's plans to win her back. Thus a heated rivalry between the two starts to build.
Who will Annie choose? What exactly is throwing rocks at Ben? And will they find the mysterious Boojum... Or something worse?

THE BEST BITS (minor spoiler warning): One of the very finest things in Stomping Ground is the wonderful characterisation. The writing is excellent, presenting some well-rounded and complex characters for the audience to care about.
The script by Riesser and Andrew Genser contains some brilliant, sparkling and realistic dialogue. It also does a fantastic job of setting up a core conflict, not just that between Ben and Paul, but between the city slicker in Ben and the different world he now finds himself in.
Ben is a computer programmer, he feels threatened by the outdoorsy blue collar men of Annie's past. When he is gently teased with the nickname ‘Big City’, we can feel his anguish as it effectively draws even more attention to the fact that he is a fish out of water. Bobek completely nails his character, making him a decent, if fairly dorkish 'soft' guy, who manages to turn his insecurities into an endearing quality. He's the audience surrogate but more than that, he's a great lead and he has the greatest arc of the story.
DeSpain is also excellent, playing the adorable Annie with aplomb. Smart, cute but not prepared to take any shit, it's easy to see why Ben and Paul are so prepared to fight over her. I predict big things in DeSpain's future.
Speaking of Paul, he is brought to life brilliantly by Blackford. He brings a tough southern charm to the role, then turns smarmy and snide in a heartbeat. He works in the part because you can actually understand why Ben would feel threatened by him. Great work, Mr Blackford.
The final piece of our central quartet, Giddings makes for some nice comedy relief. Somehow he provides plenty of exposition along with bucketloads of laughs, often at the same time. He's a character you can't help but care about and this is due in no small part to the heart that Giddings gives him.
The cast are all great, each one exceptionally well-written, and the high calibre of writing continues into the storyline. The central mystery about what is going on deep in the woods is compelling, especially with regards to the enigmatic Boojum. This is all heightened by Riesser's assured direction. He managed to juggle the character and comedy aspects with a building tension.
I especially liked the manner in which he shot the leafy woodland, making the forest a character in its own right. Some of the scenery was really quite breath-taking, while some scenes used the dense foliage to crank up the claustrophobia of the moment.
Then, when the shit finally hits the fan during the fast-moving climax, Riesser shows that he can handle the more thrilling scenes every bit as well as the character driven ones that precede it. The final siege and rescue mission move at a cracking pace and have a real sense of frenetic urgency to them. This is some very good work from a very talented filmmaker. 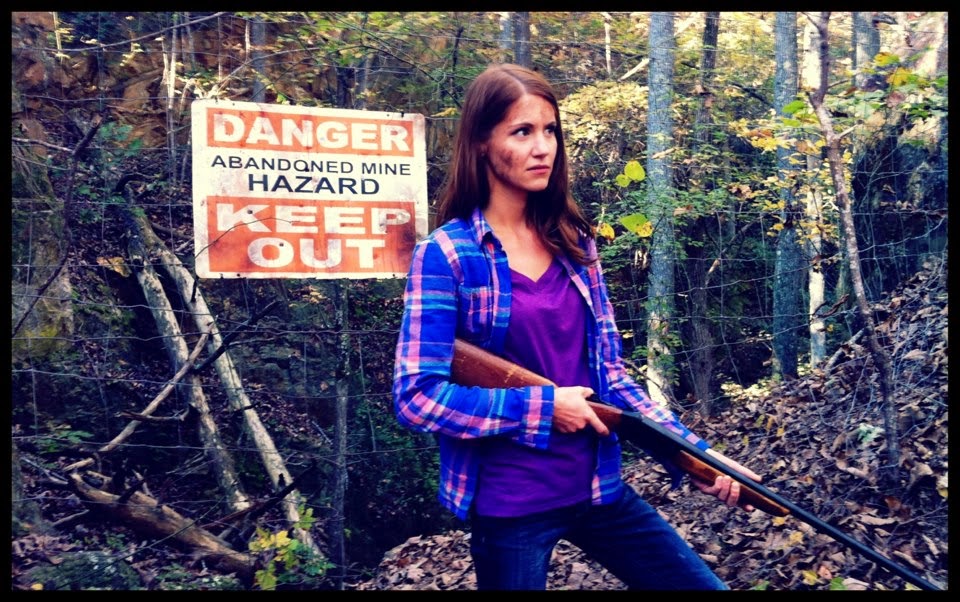 THE WORST BITS (mild spoiler warning): As I mentioned before, Stomping Ground is very much a low-budget effort. It looks good despite this, but every now and then the budgetary constraints show. The movie wisely sticks to keeping most of its filming out on location to counteract this problem, but the visuals did look like they could do with a tiny bit of extra polish now and then.
Also, I don't wish to ruin the ending, but the effects/costume work during the finale does leave a little to be desired. However, it does not spoil the film by any stretch of the imagination and is a pretty decent attempt all things considered.
Regarding this ending, it seemed pretty obvious to me from quite early on where the plot was heading, even with some decent red herrings thrown into the mix. This isn't to say that I found the ending disappointing, not at all, just that I knew what was coming. I still enjoyed it a great deal, especially as the journey to this destination was such a fun ride!
Finally I feel I should point out that as horror films go, there isn't a huge amount of horror on display here. The ‘horror’ section of the movie comes very late on and follows a very long stretch of character development and scene-setting. Then, when the action finally does hit, there are very few scares, not much in the way of gore and very jumps.
In short, the slower pace may turn off some of the stalk and slash fans who prefer a sky-high bodycount in their genre efforts. That really isn't the point of this flick — but be warned.

VERDICT: I really dug Stomping Ground. It's a smart, well-made and witty character piece, with an excellent cast, that just so happens to have a whopping great Bigfoot sub-plot. What's not to love?
It's currently kicking all kinds of ass on the festival circuit with a home and online release in the offing. Check the movie's official Facebook page for more news. While you're there, give it a like and show indie horror some support!

Until next time, I hope you enjoyed your stay.
Posted by Hickey at 04:19