RAW REVIEW: VALLEY OF THE SASQUATCH

I recently had the pleasure to watch and review Eduardo Sánchez's Bigfoot movie, Exists. I enjoyed it quite a lot, but one of the things I wrote about the Sasquatch sub-genre was 'Much like the large-footed, furry chap himself, good films about Bigfoot are very rare.'
This is a painful truth, but I'm always looking for one of those scarce examples that does it right.
And that was what led me to Valley of the Sasquatch. It's been pretty well received by critics and, as the one and only Bill Oberst Jr has a role in the flick I'm pretty much contractually obligated to review it, right?
So is this one able to fill those big footprints of the few good 'squatch movies to come before it?
Or is it another part of the pack of ugly beasts that fall short?
Read on... 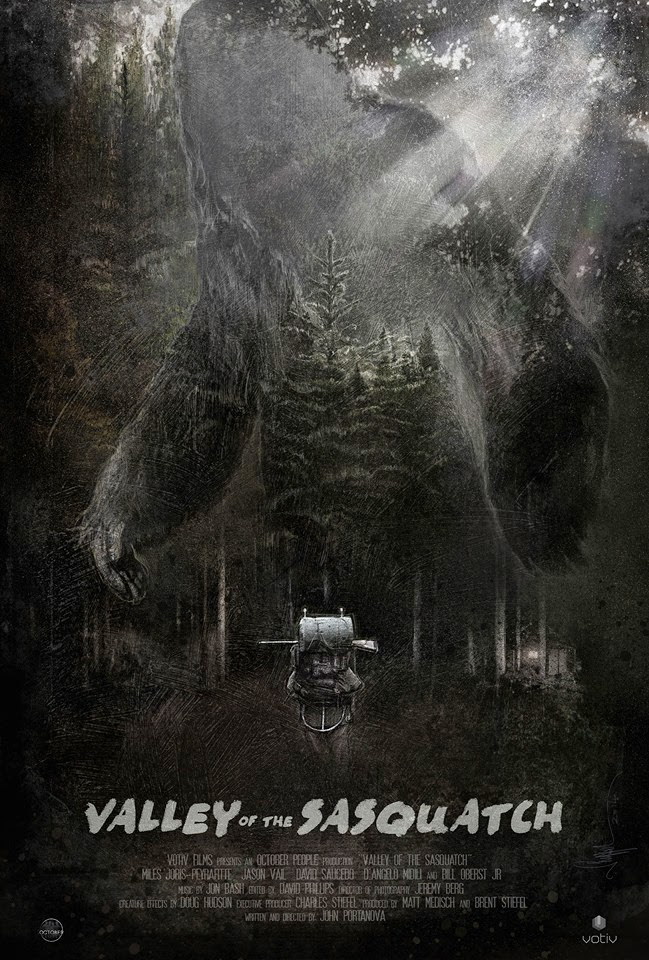 SPEEDY SYNOPSIS: I'll try not to spoil too much here but continue at your own risk.

The movie opens with grizzled hunter, Bauman (Oberst) roaming through the lush woodland on the trail of something. As he progresses deeper into the forest, he comes across a ransacked camp. However, he is not alone…
Meanwhile, Roger Crew (Vail) and his son Michael (Joris-Peyrafitte) are both still mourning the loss of Roger's wife and Michael's mother. In the aftermath of this bereavement the relationship between the two has become strained, while Roger's drinking and loss of his job have seen them slip into serious financial difficulties.
With barely a penny to their name the pair are forced to move into Roger's brother-in-law Will's (Midili) cabin in the woods, a ramshackle and basic abode, until Roger is able to get back on his feet financially. As a result of this, Michael's dreams of attending college have been dashed.
The pair lead a fractious existence together until they are joined by Will and Roger's bad-mannered, bad-influence drinking buddy Sergio (Saucedo). The group drink (well, Roger and Sergio do), discuss the big logging plans for the mountain and then stock up for a hunting trip. Sergio proceeds to bully poor Michael mercilessly, but thankfully his protective uncle Will has his back.
The hunting trip proceeds relatively without incident, but the group soon becomes aware that something is tracking them in the woods. Something hostile.
Will the group escape the beast? Can Roger and Michael repair their rift? Or can Will ensure that Michael escapes this dead-end life? And what exactly did happen to Bauman up in the woods? 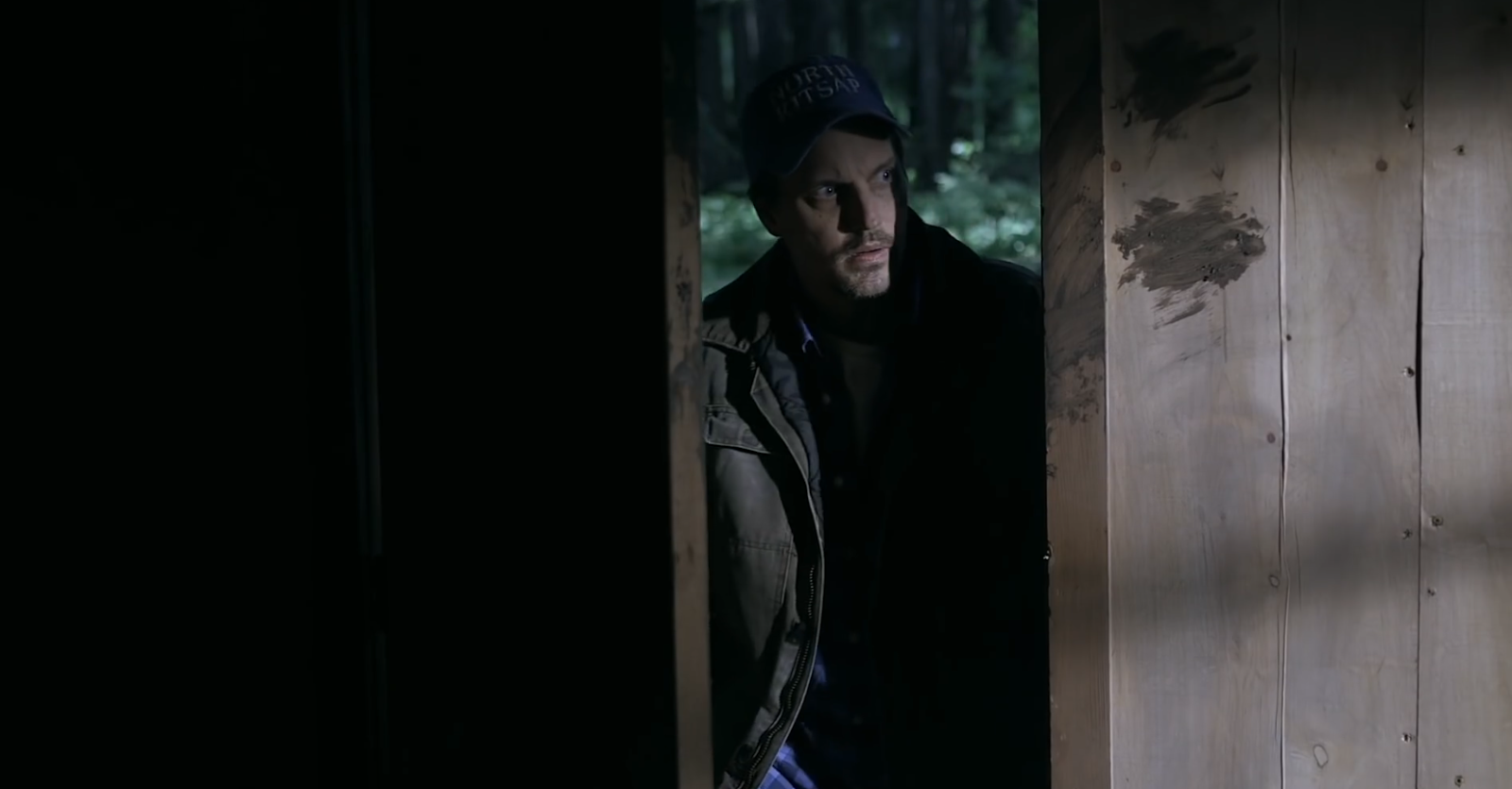 THE BEST BITS (mild spoiler warning): The indie horror scene is one in which a number of very talented acting talents are currently plying their trade. As I watch and review more films a number of familiar faces pop up time and time again. Valley of the Sasquatch got me onside very early on by including two of my favourites: the consistently great Bill Oberst Jr and fab leading man Jason Vail.

Casting two talents such as these is indicative of the film's focal point: character.
This is a wonderfully written character piece that just so happens to unfold against the backdrop of a Sasquatch attack. The beasts could just as easily be replaced with wolves, zombies, invading soldiers or even a terrible storm — the main drive of this story is the fractured and complex family relationship between Roger and Michael, with Will included as a kind of idealised, guardian angel father figure for Michael and Sergio the irascible devil on Roger's shoulder.
The story by director Portanova is compelling and heartfelt. It gives us reason to care about these characters and actually deals with some pretty weighty themes for a film with a title that would not be too out of place on a Fifties drive-thru B-movie.
As well as decent characterisation, the writing maintains a strong, coherent narrative that is never derailed by the common horror film flaws of idiotic decision making or ignoring its own rules.
The storytelling is helped no end by its very strong cast. Oberst and Vail are excellent as usual and both add a great deal of gravitas to proceedings through their finely crafted performances. They are the sort of actors who elevate a movie just through their presence, and it is always a pleasure to see them both at work.
I especially want to praise Vail's subtle, nuanced performance. He has a very complex role, one which could be utterly unlikeable, but thanks to Vail's work you can't help but root for him. Very impressive.
Speaking of impressive, I was pleasantly surprised by Joris-Peyrafitte. He's not an actor I was familiar with prior to watching VotS and I was a little dubious when I realised that he would be getting more screentime than his more experienced co-stars. These reservations were misguided. He is an immensely talented young man and carries the bulk of the movie's emotional burden admirably. He's sympathetic, likeable, believable and never melodramatic. I hope he sticks with the genre because I really would like to see more of him.
In their supporting roles both Midili and Saucedo range from competent to pretty damn great at times and never let down the team. Midili is a good looking, softly spoken guy who provides another sympathetic character while Saucedo's monstrous Sergio is the kind of dickish a-hole that you can't wait to see get his comeuppance. He TOTALLY gets his character and is clearly having a whale of a time playing the prick we all love to hate. Good work, gentlemen.
Now, if I've made it sound like VotS is all talking, relationships and no Bigfoot, that is not the case. Yes, the richness and depth of the characters adds a lot to the film, but it doesn't forego the things we watch a Sasquatch flick for. There is action (and very well done it is too), a couple of wonderfully executed splatter scenes and, of course, shaggy bellowing beasties. That's right, BEASTIES, plural.
Valley of the Sasquatch is not content to give us a lone bestial forest-dweller but a whole clan of them. What's more, while the vast majority of lower budget Sasquatch movies keep their monsters out of sight, just affording fleeting glimpses here and there in deep darkness to mask their less convincing effects work, VotS is quite rightly proud of its beasts and totally shows them off. The creature effects by Doug Hudson and his crew is very impressive. The creature make-up and costumes are really quite excellent.
And it's not just the way the Sasquatch look that exudes authenticity. Portanova has clearly studied the reported Bigfoot sightings and ensures that his beasts act accordingly. There's some very nice attention to detail that helps flesh out the creatures and adds to the intrigue of them, making them as enigmatic as their real world counterparts.
This isn't the only area in which the filmmakers are able to elevate their production values and bring this story to life. Portanova shoots the woodland and the cabin well, picking some great angles while director of photography Jeremy Berg really brings out the lush greens and deep earthy tones of the woods. This is a film that looks far better than I had any reason to expect it might. 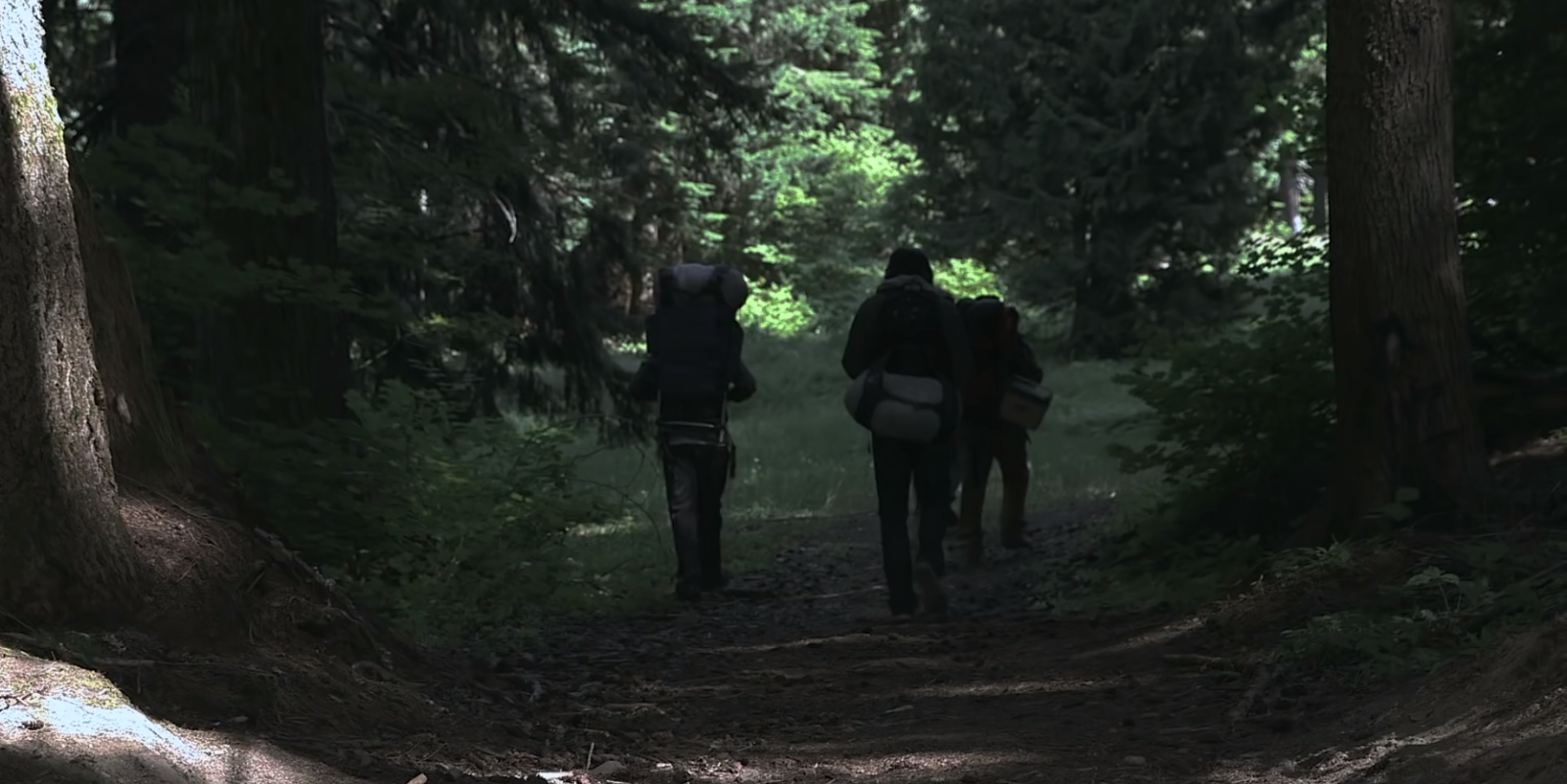 THE WORST BITS (mild spoiler warning): There's not too much to pick at here, but there are a couple of things.
First, as horror films go, Valley of the Sasquatch is not the most frightening of experiences out there. There are a couple of not particularly scary jumps and a bit of gore a couple of times but this is not the intense, Headless-style experience that the more hardcore gorehounds may crave. If you prefer your horror movies full of blood and boobs, you may find this one a little sedate for your tastes.
Also, while I praised the 'realistic' enigmatic behaviour of the family of Bigfeet (Bigfoots?) it may seem a little random to some. Their M.O. is decidedly sketchy and their endgame pretty much impossible to discern. This will probably come across as a plothole to some but I like the fact that these creatures remain mysterious and unknowable. It makes them less predictable and more 'wild'.
While the Sasquatch are pretty unpredictable, the same cannot be said of the main plot. Yes, there is the odd twist and turn here but the storyline is rather linear and within just a few moments of watching the film you are pretty much able to guess how it's going to end. It's a familiar journey, albeit a very enjoyable one.
Also, I could have done with more Vail and Oberst! They are all over the posters and publicity for the flick but both are missing for lengthy sections of the film. I know these are two busy guys but it's a real shame they didn't get to spend some significant time together. That truly would have kicked some ass!
Finally, I think Valley of the Sasquatch may suffer somewhat  from the proximity of its release to Exists. They are two very different films (with very different budgets!) but Exists is the flashier of the two. It has more scares, the whole Found Footage gimmick and a heavyweight name attached to it in Eduardo Sánchez. This isn't to say that VotS is the worse film or inferior in anyway, far from it. I actually think in some areas it surpasses Exists while in others Sánchez's flick has the edge. I just think that casual viewers looking for simpler, more high-intensity shocks will pick Exists. Personally, I'd recommend you pick up both! 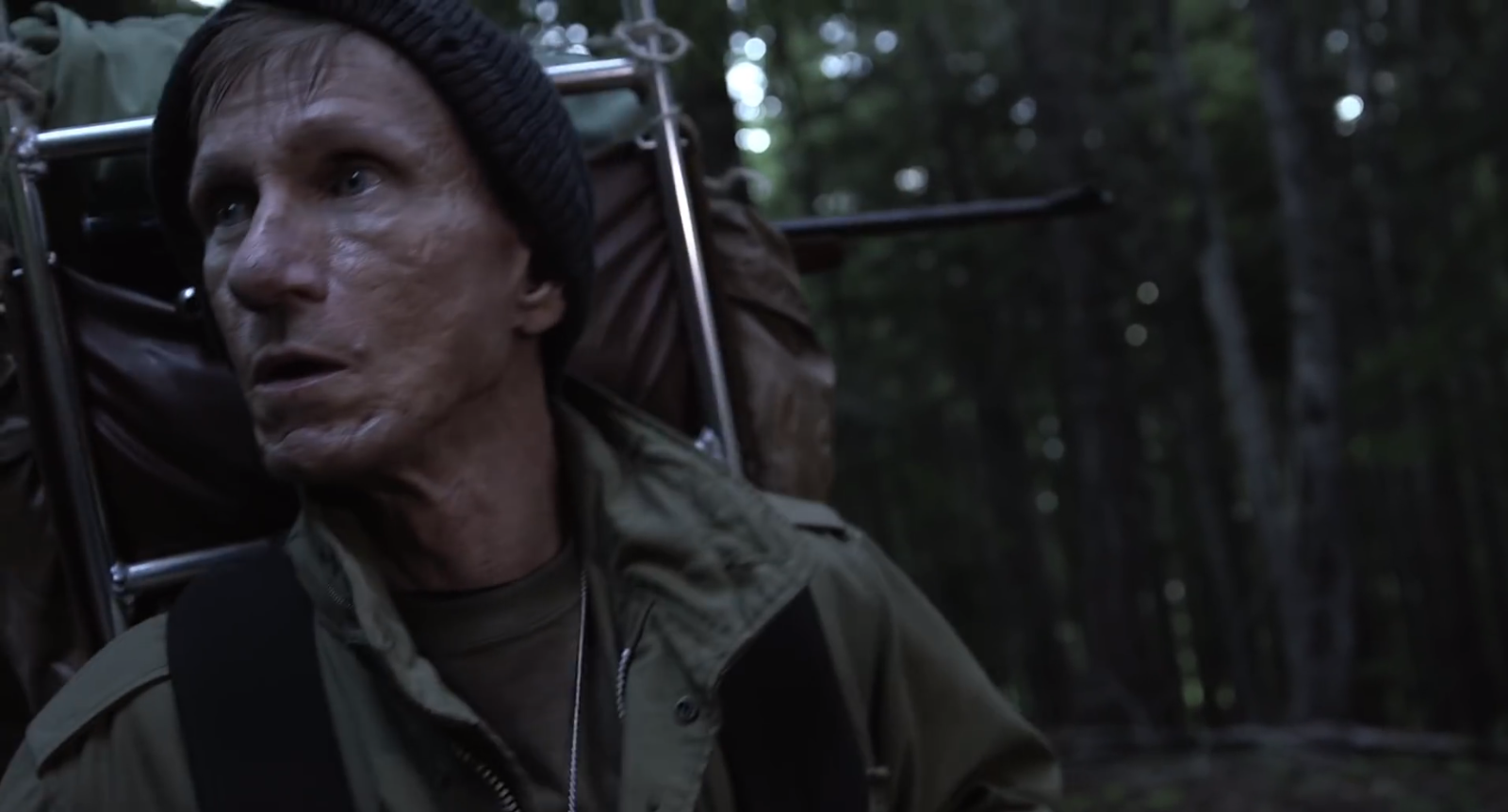 THE VERDICT: Valley of the Sasquatch is a pretty cool film. In a genre with more than its fair share of clunkers, this film rises above the crowd thanks to one thing: heart. Not just in the story, which is far more character-driven and well-written than most, but in the work of the film makers themselves. Every single dollar spent on making this movie is stretched to optimum effect, from the committed cast to the fantastic effects work to the wonderfully shot woodlands. If you have even a passing interest in Bigfoot or if you want a decent character-driven genre flick, Valley of the Sasquatch is guaranteed to make you happy.

If you do decide to check it out, head over to the film's official Facebook page to find out how and where you can see it. Give it a Like while you're there too!

Until next time, I hope you enjoyed your .
Posted by Hickey at 09:46