One of the very greatest things about being a part of the online horror community is that you regularly discover gems from independent film makers. Recently Dorchester's Revenge: The Return of Crinoline Head was recommended to me and I did some research.
I don't think it paints me in too bad a light to admit that I hadn't seen the film's predecessor, Crinoline Head, but after a quick conversation with the film's generally awesome director, Tommy Faircloth, I found myself sitting down to a Crinoline Head double-bill.
The first was made all the way back in 1995. It's a low budget effort and a couple of the performances to reflect this, but in an era where horror had become almost unbearably self-aware, Crinoline Head was a refreshing, tongue-in-cheek throwback to the slasher heyday of the 80s. It felt very much like it could have been lifted straight from the same video store shelves as the likes of Sleepaway Camp, The Burning or The Prowler.
So the first was a pretty good film (play your cards right and I may even hit you all with a retro review of it, complete with all the usual swearing, bad-behaviour and irreverent humour!)
Could the soon-to-be-released sequel keep the good work up? Or even build on it?
Read on... 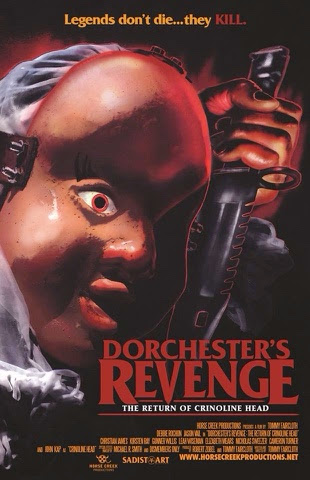 SPEEDY SYNOPSIS: I’ll try not to spoil too much here, but read on at your own risk, also as this is a sequel, spoilers RE: Crinoline Head are kind of essential. Sorry!

Set 20 years on from the events of Crinoline Head, survivor Paul (Vail) is now a college teacher, albeit one whose life has fallen apart due to his obsession with serial killer and doll fan, Dorchester Stewart. It seems that following the harrowing events of the first film, Paul was unable to move on, researching Dorchester for a book that saw him neglect and lose his wife Now, finally, he is finally set to lay his demons to rest... until a class project sees his deepest fears laid bare.
After asking his students to write an essay on local legends, the frankly bastardly insensitive David (James) and his dorkish friend James (Willis) announce to the class that they are writing theirs on Crinoline Head. Paul isn't happy, kindly explains the events of the first film to the class (and anybody who hasn't seen the first film) but ultimately gives them permission to head to Stewart's abandoned lakefront home to research the story.
So off they go (rocking out to some metal along the way), joined by the very sweet Shelby (Ray) and Donna (Wiseman).
Upon arrival they are surprised to see that much of the original building has burned down... but not as surprised as they are to discover hard-drinking, filthy mouthed Betsy (horror veteran Rochon) living in a mobile home on the site, brandishing a shotgun and spitting a steady stream of sexual innuendos.
Finally the group are joined by loveably lunk Scott (Sweezer), buddy Reggie (Turner) and the fabulously vindictive, slutty Janet (a very impressive Mears), who, well, pretty much turn up because they've not got much better to do and think this is as good a place as any to run amok as hormone-fuelled teens tend to do.
However, it isn't long before we realise that this idyllic location may not be fun, fun, fun as a spate of steadily more gruesome murders causes the cast's numbers to dwindle at an alarming rate. David was determined to prove that Dorchester was still out there... and now it could be the death of them all. 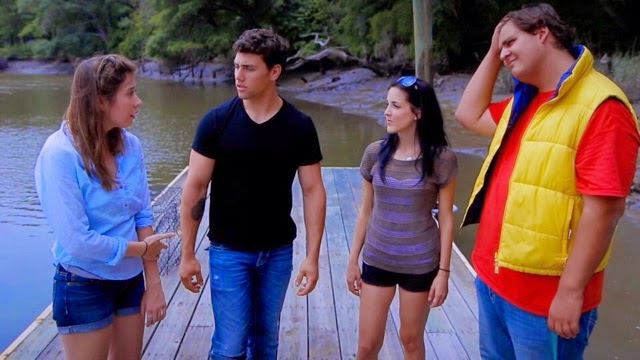 BEST BITS (mild spoiler warning): The first film was good fun, in a low-budget, throwback way - yet this film completely surpasses it on nearly every level.The production values are frankly superb, the unfeasibly attractive cast are all perfect in their roles (I particularly enjoyed the hilarious Scott and Janet, but everybody was brilliant.) and the story and camerawork were absolutely top drawer.
As if that wasn't enough, this film is so well-written that you really needn't be familiar with Crinoline Head to just dive straight in and enjoy the events of this picture, no mean feat in a film that so perfectly works as a sequel too.
With this film Tommy Faircloth has got the balance EXACTLY right - the film is packed with plenty of references for fans of the original and really does feel like a natural extension of that story, yet still remains accessible to newcomers.
The film retains the campy, tongue-in-cheek charm of the original, but updated and polished for today's audiences.
Furthermore, the humour throughout is legitimately VERY funny, from Debbie Rochon's crude explanations of her innuendos to Janet's acidic putdowns, the film made me laugh several times. There's even a brief detour midway through the film in which three catty drag queens on their way to a gig at a local bar end up wandering into the killer's path. It contributes NOTHING whatsoever to the ongoing plot of the film, but it is so much fun it really doesn't need to.
Speaking of the killer, his hulking design works on so many levels. After seeing musclebound potential victims in Scott and David, I felt the killer would have his work cut out - but Crinoline Head is a great bear of a man and looks more than capable of beating the living hell out of anybody that gets in his way, while the cracked doll-face mask that he sports (much like Billy Pon's equally terrifying Doll Boy) is the stuff of nightmares.
This delightfully creepy design work carries over into a couple of sets (in particular THAT doll-filled lair) while the edgy nature of the film definitely carries over into a couple of the kill scenes. One is guaranteed to make any girls watching shriek, while the heartbreaking pinata scene is another memorably horrifying moment. 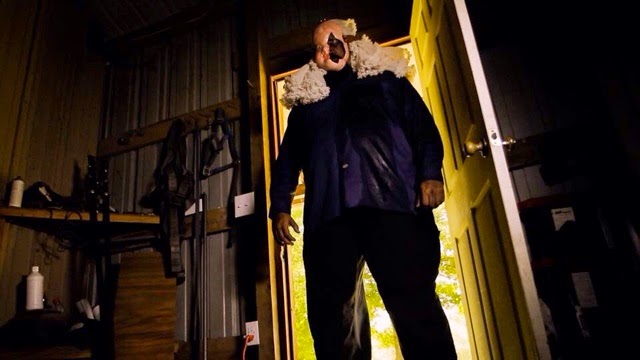 WORST BITS (mild spoiler warning): I really can find very little to fault with this film, so don't expect this section to be too long!
While this film definitely improved on the pacing issues of the first film, it still seemed to take a while to get to the bloody end of the story. Frankly, I didn't mind because I really enjoyed getting to know the characters and building some sympathy towards our victims before the hammer fell, but if you're into wall-to-wall splatter for a film's run-time, this one requires a little more patience.
On a similar note, a few of the deaths do occur off-screen. I'm not sure whether this was due to budget constraints or to help build atmosphere for when the red stuff really hits the fan later, but either way, it may cause gorehounds to moan a little. However, I thought the kills pretty much all worked wonderfully without over-egging the gore effects.
On a more personal note, I would have liked to see more from Vail's Paul in the film. Sadly his screentime doesn't match some his younger co-stars but I really dug what he brought to the film and would have loved to see more of it. The scenes he had were all great - I could have just done with a few more!
Finally, I was extremely disappointed that nobody was killed with a vegetable this time round after the original's absolutely marvellous death by celery. You let me down there, Tommy! 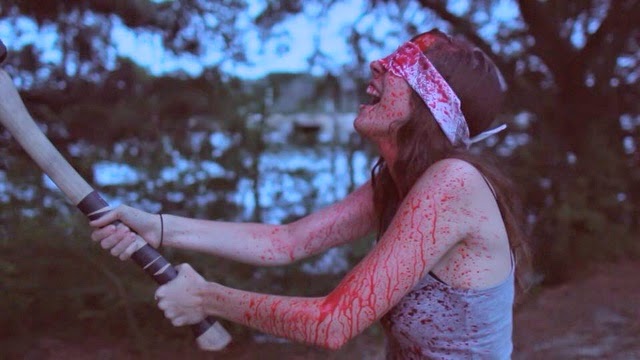 VERDICT: Do you like slasher films? Do you like supporting independent horror? Do you want to see some genuinely funny, likeable protagonists get offed in imaginative ways?
Yes? WATCH Dorchester's Revenge: The Return of Crinoline Head.
It is smart, funny, creepy and just goes to show that the era of the slasher is far from over. I thoroughly recommend this film, so get yourselves over to the film's official facebook page, LIKE the living daylights out of it, and keep your fingers crossed for a UK release. In the meantime I cannot wait to see what Tommy and the gang have lined up for us in the future -let's just hope it's not another 20 years before we can return to Dorchester's world.

Until next time, I hope you enjoyed your stay.
Hickey at 07:13
Share